Enjoying a beach day with her husband Zandy Reich and their son Ever Leo, the 'Scream Queens' alum takes a selfie flaunting her bikini body and her barely noticeable C-section scar.

AceShowbiz - Lea Michele has never been the same since she welcomed her first child that left her with a C-section scar. Embracing the flaw, the actress has showed off the mark that she dubbed "the greatest reminder in the whole world."

The 34-year-old took to her Instagram Story on Sunday, August 1 to share a selfie while enjoying a beach day with her husband Zandy Reich and their son Ever Leo. Flaunting her bikini body in a black two-piece swimsuit, she looked chic with aviator sunglasses while accessorizing with a necklace.

In the caption, the "Glee" alum pointed out to her barely noticeable C-section scar. "C-section scar so low you can't even see it," she wrote over the photo. She added, "Although I don't mind at all because it's the greatest reminder in the whole world! I can't believe it's August and my baby's going to be 1 soon!" 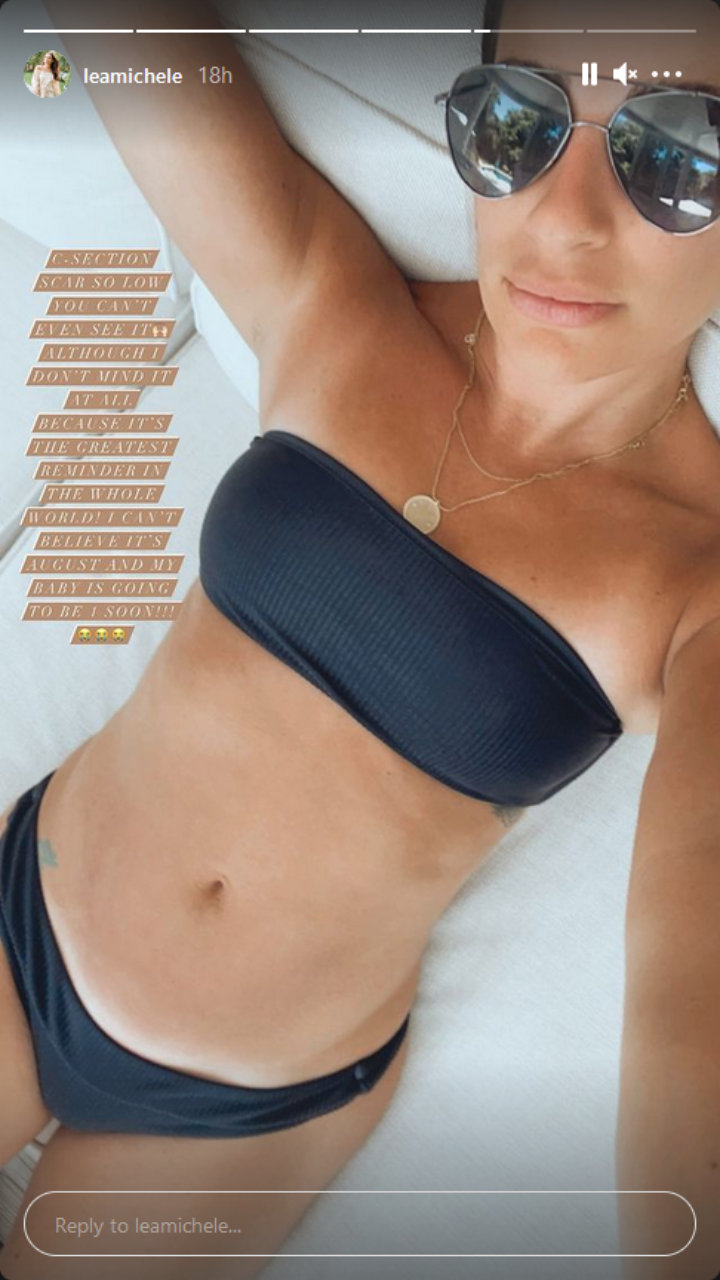 Lea gave birth to her first child with Zandy on August 20, 2020, more than a year after the couple tied the knot. In May of this year, she reflected on her postpartum body. In a photo posted to her Instagram Stories that showed her wearing a black bikini, she shared that she was "feeling very grateful for this body right now for its strength in making a baby!"

Meanwhile, in March, the former Rachel Berry depicter on the FOX musical series opened up about her "very, very intense, very scary pregnancy." She revealed that she had polycystic ovary syndrome (PCOS) diagnosis, which nearly led her to give up on trying for a baby.

"I really felt like maybe this isn't meant to be for me right now," she shared on Katherine Schwarzenegger's "Before, During & After" motherhood series on Instagram Live, saying it was "always my biggest fear in my entire life that I wouldn't be able to become a mom. It's what I've wanted more than anything. And, emotionally, it just started to build and build."

Just when she and her husband decided to take a pause from trying, Lea "unexpectedly" found out she was pregnant in December 2019 and had the "most blissful 72 hours of my life." That, however, wasn't the end of her difficult journey to motherhood as she started heavily bleeding, which lasted throughout her first term.

Even when she finally announced she was pregnant, the mother of one admitted, "I still was uncertain if the pregnancy was going to last." She added while holding back tears, "Oh my god, I'm going to cry. I just woke up and I was like, 'I just want to be a mom right now. I want this time.' And it was horrible. It was the lowest I've been in my entire life."

Lea Michele Hospitalized During Pregnancy Due to Intense Bleeding