To celebrate the special occasion, the former 'Gossip Girl' star and the 'Deadpool' actor visit Boston sushi eatery O Ya, the same location of their first date.

AceShowbiz - Apparently there's no day without trolling each other for Blake Lively and Ryan Reynolds. The "Gossip Girl" alum and the "Deadpool" actor, who have been known for making fun of one another on social media, even kept up their tradition when celebrating the 10th anniversary of their first date.

On Saturday, July 31, the 33-year-old beauty shared a photo of herself posing next to her husband before going out for an evening outing. "10 years later. We still go out on our 'first date.' But in much more comfortable shoes," she captioned it.

Blake and Ryan then went to Boston sushi eatery O Ya, the same place where they had their first date. "If it weren't for this place. We wouldn't be together. No joke. No restaurant means more to us," she wrote alongside a picture of Ryan.

The married couple later took a selfie outside the restaurant. "Our favorite restaurant with her 4th favorite date," the 44-year-old quipped, before sharing a broader crop of the photo as his wife requested.

"Posting this again because I cut out my wife's cute earrings. She trained me better than this. Sorry if I let anyone down," Ryan wrote on the top of his face. Blake then reposted his Story and simply agreed, "That's right."

During the meal, Ryan and Blake set aside time to take a photograph with restaurant employees. The mother of three looked stunning in a white button-down sundress with black polka dots that she paired with black sandals. Her spouse, meanwhile, donned a blue shirt, grey slacks, tan sneakers and a tweed driving cap for the outing. 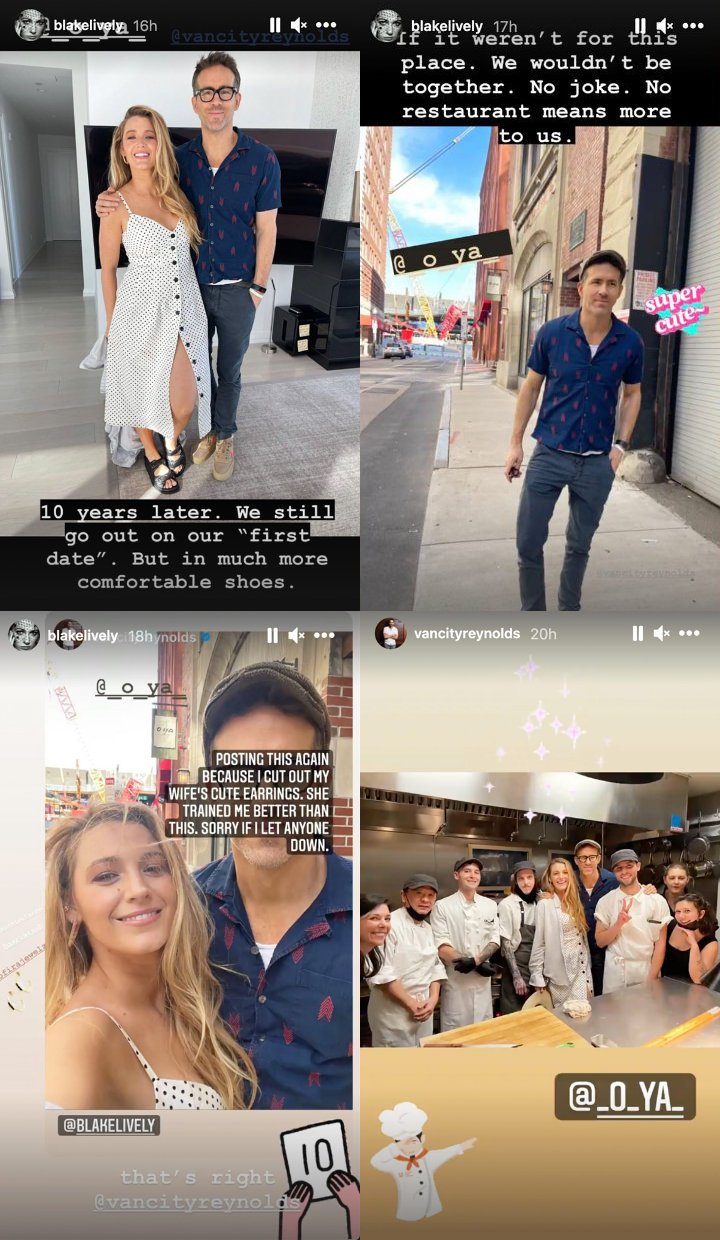 Blake Lively and Ryan Reynolds celebrated the 10th anniversary of their first date.

The twosome met on the set of "Green Lantern" in 2010. They began dating a year later and married in September 2012. Together, they share three daughters, 6-year-old James, 4-year-old Inez and 21-month-old Betty.

Earlier this month, Ryan got candid about his first meeting with Blake. "I met Blake on the darkest crease in the anus of the universe called 'Green Lantern'," Ryan recalled when speaking to Jason Bateman, Sean Hayes and Will Arnett on "SmartLess" podcast. "We were friends and buddies and about a year and a half later we went on a double date but we were dating separate people."

"We hung out and kind of, you know, we always kind of kept in touch but sort of casually. And then next thing you know, she was going to Boston. I was going to Boston. So I was like, 'I'll ride with you,' " he further detailed. "We got on the train and rode together and then I was just begging her to sleep with me."