While the 'Bones' hitmaker cites a scheduling conflict for her decision to back out, the 'I Hope' singer blames 'personal circumstances' for her exit from the upcoming gig.

AceShowbiz - Maren Morris and Gabby Barrett have pulled out of performances at the upcoming CMT Music Awards.

The "Bones" hitmaker Morris has cited a scheduling conflict for her decision, while "personal circumstances" have forced Barrett to nix her gig.

Both took to social media on Tuesday, June 8 - the eve of the big show - to confirm their exits, with Maren stating, "Due to a scheduling conflict, I will not be performing at the CMT Music Awards on Wednesday."

She went on to wish her replacement, JP Saxe, well, adding, "I know @jpsaxe will slay it and I am so excited for his album to come out soon!" The Canadian star will be joined onstage by Ingrid Andress. 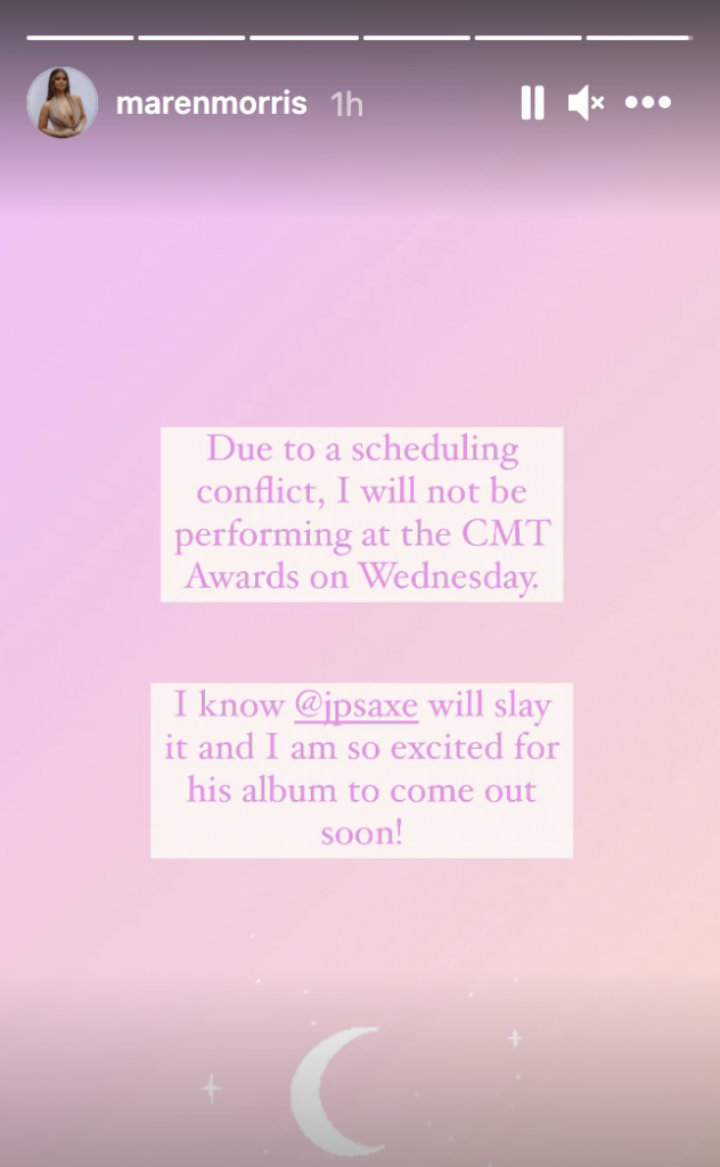 Barrett, who has been replaced by Lindsay Ell, adds, "I'm really sad to share that because of personal circumstances I won't be able to perform with @ladya and @carlypearce on Wednesday at the @cmt Music Awards! I'll be rooting for you guys and all of the incredibly talented nominees and performers! So appreciate all of your support and will see yall on the road this summer [sic]."

Barrett won the Breakthrough Video of the Year honor at last year's 2020 CMT Music Awards for "I Hope". It was her first major country music prize.

Both she and Morris are nominated for Female Video of the Year at Wednesday's prizegiving. Morris is also nominated for Best Collaborative Video and Best Family Feature for "Chasing After You" - her duet with husband Ryan Hurd.

Maren and Miranda Lambert lead all nominees ahead of the ceremony, which will be hosted by Kelsea Ballerini and Kane Brown.

Maren Morris Criticizes the Term 'Snap Back' After Giving Birth: It's 'Troublesome'

Johnny Depp Teams Up With Jeff Beck for New Album