The 35-year-old mom reunites with her three-year-old daughter, Ariana Sky, after the 'Jersey Shore' star got arrested for domestic violence in Los Angeles on April 22.

AceShowbiz - Jen Harley has offered a look at the road trip she wished to be the "last time." In the wake of Ronnie Ortiz-Magro's Los Angeles arrest for domestic violence on Thursday, April 22, the ex-girlfriend of the "Jersey Shore" star documented the moment she had to pick up her three-year-old daughter Ariana Sky.

Making use of her Instagram Story, the 35-year-old reality star made a few of posts regarding her sudden road trip. "I want my baby home," she wrote in one Story. In another one, she shared a clip of her driving with a caption that read, "Last time I'm ever making this drive."

Moments later, Jen added a sweet snap of her cuddling little Ariana. "Can't drive home like this but I'll hold her as long as she needs it [crying emoji]," she wrote over the post. She later put out a picture of a lion and its infant, as a reference to her protective nature, and added the words, "Till the day I die." 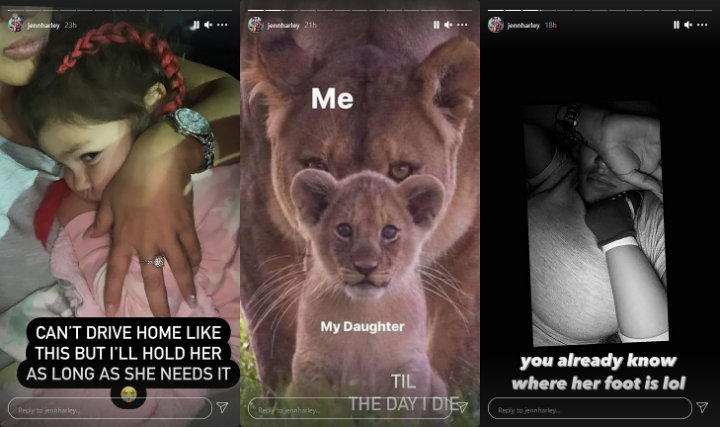 On Friday, April 23, the Las Vegas realtor shared on her Instagram Story a cryptic quote. "We must accept the end of something in order to begin to build something new," her wordy post read.

Ronnie, in the meantime, was arrested in Los Angeles at 4.15 P.M. on Thursday. According to the Los Angeles Police Department, his booking fell under "intimate partner violence with injury with priors." It was reported that his daughter Ariana was with him since it was his turn to watch the little girl.

Three weeks prior to the arrest, the former "Famously Single" star shared a video tribute to Ariana on his Instagram account. Along with the caption that read, "My everything," he posted a video which was filled with snaps of father-and-daughter moments.

This domestic violence arrest was not Ronnie's first. He was taken into custody for similar offence in October 2019. At the time, he was said to hit and chased Jen with a knife after having a heated argument. Before police arrived, he locked and barricaded himself with Ariana in an AirBnB rental home.