The 'Blow a Check' rapper is reportedly 'doing fine' while he remains hospitalized after being shot when leaving a party in Miami beach and heading to a strip club.

AceShowbiz - Another rapper has fallen victim to gun violence. Zoey Dollaz, whose real name is Elvis Milord, was shot multiple times after leaving a party in Miami on Wednesday night, December 9. Thankfully, he is alive despite the incident.

Local hip-hop journalist Tony M. Centeno broke the news on Twitter. He tweeted to ask fans to send prayers for Zoey, "My dawg @ZoeyDollaz is a true soulja. I know he'll pull through and recover quickly. Praying for him and his family."

"My sources say Zoey is doing fine after he was shot multiple times while on his way to Booby Trap in Miami last night," he shared some details of the incident. He added in another tweet, "Hopefully he'll be well enough to tell us what happened in his own words. Personally, I'd feel better hearing it directly from him than an IG blog." 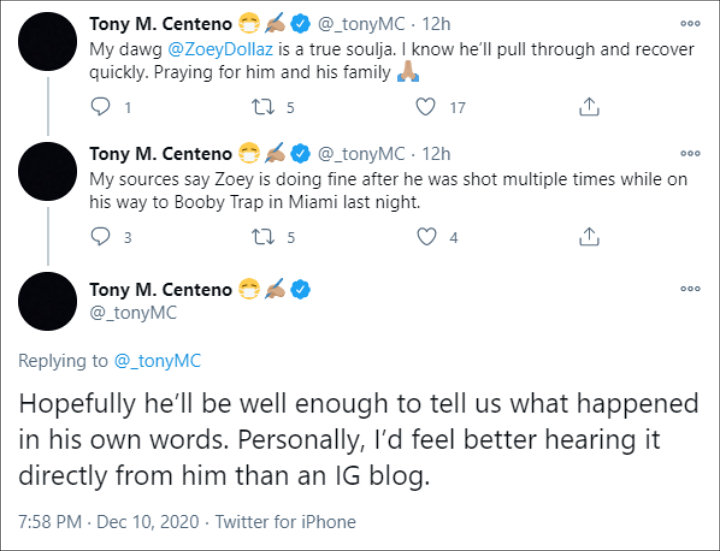 A rep for Zoey has also confirmed the shooting, releasing a statement from Zoey's close friend Donny "DizzyCleanface" Flores, who revealed more details of what happened that night. He said that Zoey had just attended "the Teyana Taylor private party." When "he left the parking lot..., a car started following him and shot multiple times."

Dizzy went on saying, "Pray for him and his family for a speedy recovery. The ironic part is he just launched a bullet-proof car company for celebrities and high-end people. The company was starting next week."

Zoey's Instagram Story posts showed he was in the studio recording music on Wednesday night before celebrating Teyana's 30th birthday in Miami with her, Sean "P. Diddy" Combs, Trina, A$AP Ferg and a few dozen other people.

According to NBC, Zoey was driving on the Julia Tuttle Causeway en route to strip club Booby Trap when the shooting happened. His black Mercedes sedan entered westbound I-195 from Alton Road just after midnight when a silver SUV pulled alongside the Mercedes and someone from inside the vehicle opened fire at the rapper's car.

Zoey was hit in the leg. He was shot 5 times and was taken to Jackson Memorial Hospital for treatment. He is reportedly in stable condition now. A female passenger was also in the car, but was not injured.

Meanwhile, Fabolous sounded off on the danger of being a rapper, calling it "the most dangerous job in America." He elaborated on his remark, "Black men are surviving the trenches, constant battles in a warzone environment, make something of themselves as artists, become famous, make millions of dollars, change their lifestyles, and still end up dead or in jail."