In a statement released on his Instagram page, the 'Blow a Check' spitter says he feels 'grateful and lucky to be alive' after his car was struck with bullets in Miami earlier this month.

AceShowbiz - Zoey Dollaz has unveiled graphic evidence of recent shooting that landed him in the hospital. Making use of his Twitter account, the rapper posted on Monday, December 21 several pictures of his bullet-ridden vehicle.

During the incident in Miami earlier this month, the hip-hop star was reportedly shot multiple times with his car taking at least 30 rounds. The photos showed the car plastered with marks where the bullet entered.

The inside furniture of the car was splattered with blood, while the windows were almost shattered after getting struck with bullets. Acknowledging that God played a role in saving him, he wrote in the caption, "God works harder than the devil for sure." 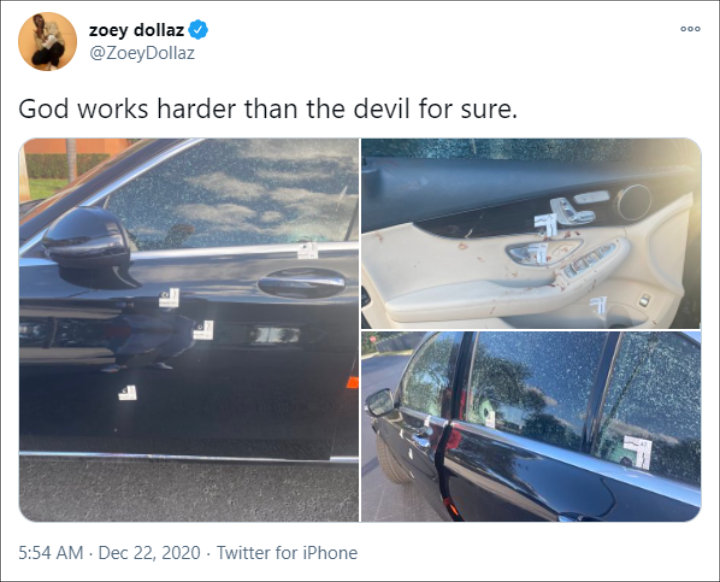 In a separate post on his Instagram page, Zoey expressed his gratitude for being alive and for people's support. "To everybody that reached out to me I want to thank you from the bottom of my heart!" the "Blow a Check" rapper wrote. "To everyone that sent out prayers for me, thank you because it worked! Grateful for your support & prayers I needed them! Please continue to pray for me as I go through this healing recovery & get back on my feet & back to doing what I do."

He continued, "Beyond grateful & lucky to be alive. Its very hard for me to get back to everybody that reached out because it's so many but I want everyone to know I am more than thankful for all the love!!!!!"

Zoey, whose real name is Elvis Milord, was shot multiple times after leaving a party in Miami on Wednesday night, December 9. His rep later confirmed the shooting, releasing a statement from Zoey's close friend Donny "DizzyCleanface" Flores, who revealed that Zoey had just attended "the Teyana Taylor private party." When "he left the parking lot..., a car started following him and shot multiple times."

According to NBC, Zoey was driving on the Julia Tuttle Causeway en route to strip club Booby Trap when the shooting happened. His black Mercedes sedan entered westbound I-195 from Alton Road just after midnight when a silver SUV pulled alongside the Mercedes and someone from inside the vehicle opened fire at the rapper's car.

Zoey was hit in the leg. He was shot 5 times and was taken to Jackson Memorial Hospital for treatment. A female passenger was also in the car, but was not injured.

Ari Fletcher Claps Back at Haters Making Fun of Her Look