Through the foundation, the Sicko Mode hitmaker will roll out the Waymon Webster Scholarship which covers tuition fees for HBCU students who are experiencing financial hardship amid the pandemic.

AceShowbiz - Travis Scott (II) keeps paying it forward. When celebrating the third annual "Travis Scott Day" in the City of Houston, Texas, the "Sicko Mode" hitmaker pushed forward his philanthropic endeavors by launching Cactus Jack Foundation with the aim to "help those who got that same passion to go hard in life."

On Wednesday, November 18, the 29-year-old made the big announcement via Twitter. "CACTUS JACK FOUNDATION SUPPORTING THE NEXT GENERATION OF CREATIVE KIDS #happytravisscottday http://cactusjack.foundation," he first tweeted. In a following tweet, he explained, "Think it's important we use the opportunity's giving to us to help those who got that same passion to go hard in life." 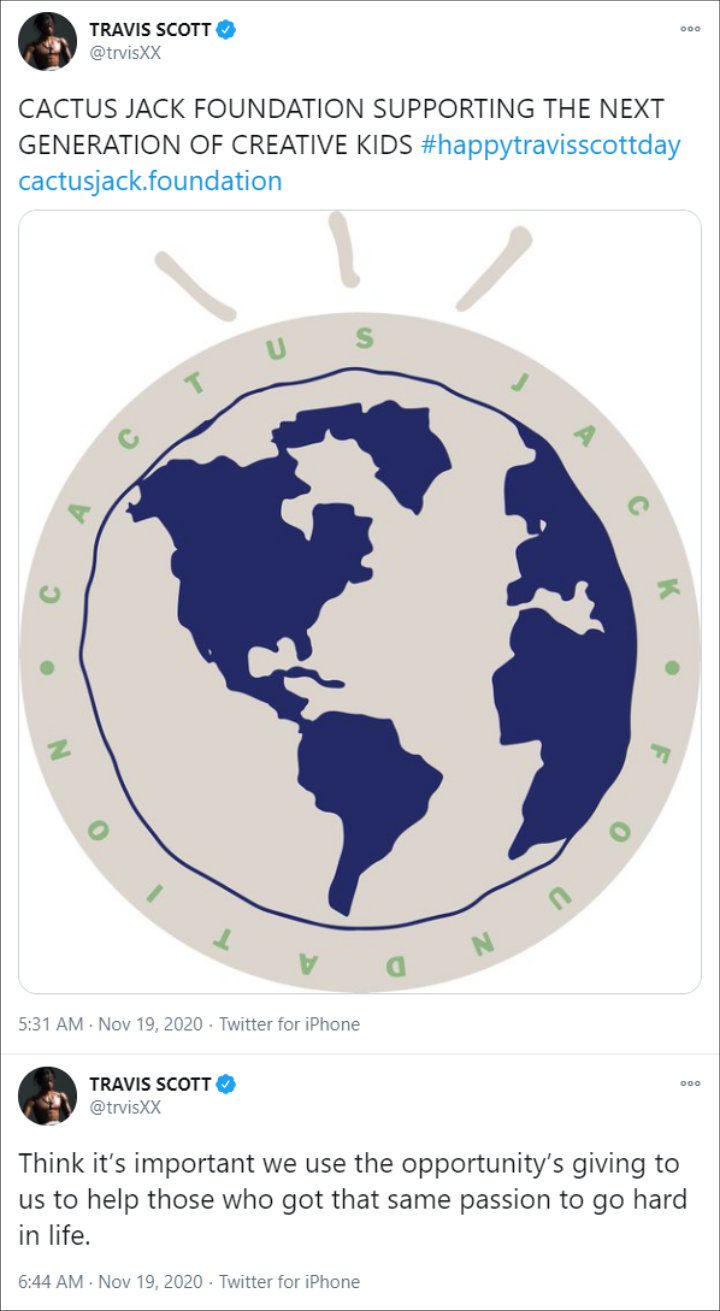 Travis' new foundation was established to provide educational access and creative resources for youth in his hometown of Houston, Texas. It's first initiative is giving away the Waymon Webster Scholarship, which covers tuition fees for HBCU students who are experiencing financial hardship amid the pandemic.

The scholarship was named after Travis' late grandfather. "Waymon Webster was a Dean of the Prairie View A&M graduate school. My grandfather wanted me to take it all the way through college, I feel there is a power in education so to be able to give someone the opportunity to fulfill that dream as my papa thought for me is amazing," he wrote in the statement on the organization's website.

The ex-boyfriend of Kylie Jenner has personally selected a number of students who are enrolled in Morehouse College, Howard University, Texas Southern University, Grambling State University, which happened to be his mother's alma mater, and Prairie View A&M University, which was his father's, for the fund.

The rapper's charitable organization also had a multi-year partnership with his hometown on Cactus Jack Gardens, a community-based agriculture program for local elementary schools. In addition, it will also bring its fashion curriculum to Houston through My Brother's Keeper program by joining forces with The New School's Parsons School of Design.

As for "Travis Scott Day", it was first declared by Houston Mayor Sylvester Turner following the debut of Astroworld Festival at NRG Park. Back in 2018, the mayor stated, "Education and mentorship equip young people with the skills they need for a successful career path. I am grateful that Travis is partnering with the City of Houston to support our nationally-recognized My Brother's Keeper program, which provides support for boys and young men of color."

"I also applaud him and his Cactus Jack Foundation for investing in the lives of young men and women by providing scholarships to cover their tuition at HBCUs," Sylvester added. "If we can turn around one person in one family, that positively impacts every neighborhood, which builds on the resilience and strength of our entire city."