Internet users believe that the 'SICKO MODE' rapper, who has been dropped from several events following the incident, will headline the July 2022 show along with Kanye West and Playboi Carti.

AceShowbiz - It looks like Travis Scott (II) is not completely canceled following the Astroworld tragedy. After Rolling Loud teased the early-bird presale for its upcoming Miami event in 2022, fans were convinced that the "SICKO MODE" rapper will be among the headliners.

Rolling Loud shared the announcement via Twitter. "This early bird presale is for the ragers that trust the process," it declared, before adding in another post, "Every lineup we drop is a hit so just know..." 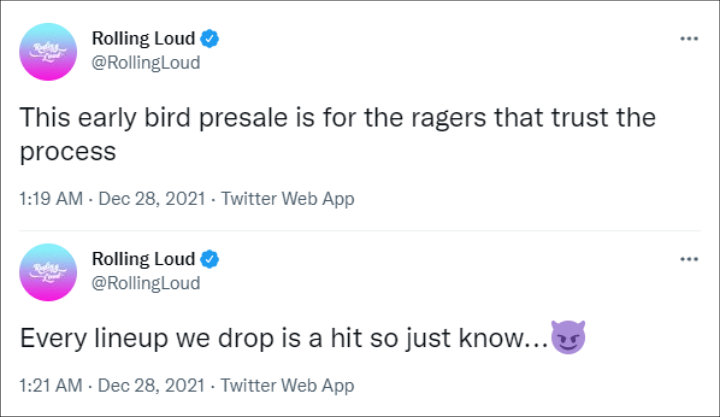 Rolling Loud teased the early-bird presale for its upcoming Miami event in 2022.

The word "ragers" prompted fans to assume that Travis would be in the lineup. "Pls tell me Travis is performing," one user commented. "[Playboi Carti] Friday, Travis Saturday, [Kanye West] Sunday, Let's do this," another added. A third then chimed in, "TRAVIS , CARTI, AND YE that would be the best lineup of all time."

"[Rolling Loud] tweeted the [cactus emoji] when Kanye performed praised god and then liked a bunch of quote tweets about Trav so it's 100 percent possible," someone else penned on Reddit. "Plus they probably already pay a ton of insurance just with companies being prejudiced about booking hip hop acts. So I can see him being there."

Rolling Loud Miami is set to take place from July 22 to 24 at the Hard Rock Stadium. Tickets will be available on Thursday afternoon, December 30 and can be locked in for $9.99 down."

Both Rolling Loud organizers and Travis have yet to confirm the speculation. However, his possible return could be a surprise for many considering that he has been removed from several events in the wake of the Astroworld incident, which took the lives of 10 people.

Following the ordeal, the Cactus Jack Records founder was dropped from the lineups of Day N Vegas and Coachella. It also cost his partnership with Anheuser-Busch, which decided to stop producing his adult beverage, Cacti.

Recently, Dior announced that its collaboration project with Travis has been postponed "indefinitely." The luxury brand said, "Out of respect for everyone affected by the tragic events at Astroworld, Dior has decided to postpone indefinitely the launch of products from the Cactus Jack collaboration originally intended to be included in its summer 2022 collection."