Celebrating their milestone on social media, the 'Still Alice' actress says that there's no one she'd 'rather be with' other than the film director and producer.

AceShowbiz - Julianne Moore is celebrating 17 years of marriage to Bart Freundlich with a heartfelt dedication. On Sunday, August 23, the "Still Alice" actress took to her social media account to gush over her movie director husband.

In commemoration of the milestone, the Oscar-winning actress shared a snapshot of them smiling while wearing matching white t-shirts. "I said he should take a shower. He said my hair smelled bad, like mildew, or an old box," she began her tribute by poking fun at each other's personal hygiene.

Declaring her love for the filmmaker, the 59-year-old star went on to enthuse, "Happy 17th Wedding anniversary @freundlich96 - there is no one I'd rather be with everyday. I love you. #anniversary #quarantine."

Julianne's post has since received congratulatory comments from a number of fellow celebrities. One in particular came from Tom Hanks' wife Rita Wilson who wrote, "Happy Anniversary you two!" Another one was from former "Friends" star Courteney Cox, who simply exclaimed, "Happy anniversary!!!" Naomi Watts, in the meantime, chimed in by writing, "Hysterical happy anniversary." 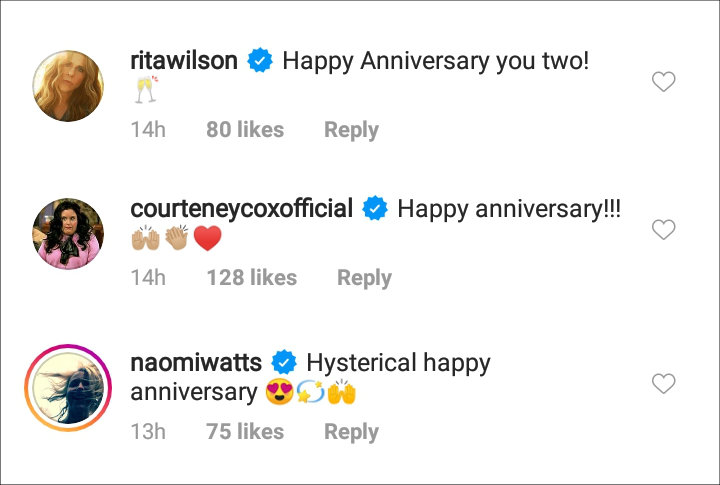 Days prior to her wedding anniversary, the "Kingsman: The Golden Circle" actress posted a selfie of them during what seemed to be an outing. "AND…. we dress alike too. Five months and everyday together," she captioned the image, referencing to them spending a lot of time together due to the coronavirus quarantine.

Julianne met her husband in 1996 when they worked together on "The Myth of Fingerprints". The pair shared two children together, a 22-year-old son named Caleb and an 18-year-old daughter named Liv. They got married in 2003.

In March 2019, the Academy Award winner opened up about what makes her marriage work. "We have this narrative in our culture that if you want a career, you have to work hard, go to school, look for a job, you have to apply yourself but love is supposed to just happen to you," she told PEOPLE.

"One day you're going to meet someone and get hit over the head and boom! That happens in romantic comedies, but in real life you have to make time," she continued explaining. "When you find a person, you have to invest in them and that relationship. And that's what love is."

Julianne Moore Spooked as She Found Drunken Stranger on Her Couch