'The Voice' judge kicks start a friendly feud with the husband of Behati Prinsloo by sharing a screenshot of the Top 10 songs on iTunes in which 'Happy Anywhere' bested 'Nobody's Love'.

AceShowbiz - Blake Shelton took his banter with pal Adam Levine up a notch on Saturday (July 25) by bringing the Maroon 5 star's wife Behati Prinsloo into their friendly rivalry.

"The Voice" U.S. coaches both released new music on Friday, with Blake taking to Twitter to share a screenshot of the Top 10 songs on iTunes, where his song with girlfriend Gwen Stefani, "Happy Anywhere", was number one and Maroon 5's song, "Nobody's Love", was in second place.

Adam then took a screenshot of Blake's tweet, posting it on his Instagram Story, writing, "Eat s**t cowboy! I'm Comin for ya!"

Gwen then took to the site to stand up for her man, writing on her own Instagram Story, "@adamlevine leave my boyfriend @blakeshelton alone," to which Adam replied, "I will never leave him alone. He was my boyfriend first." 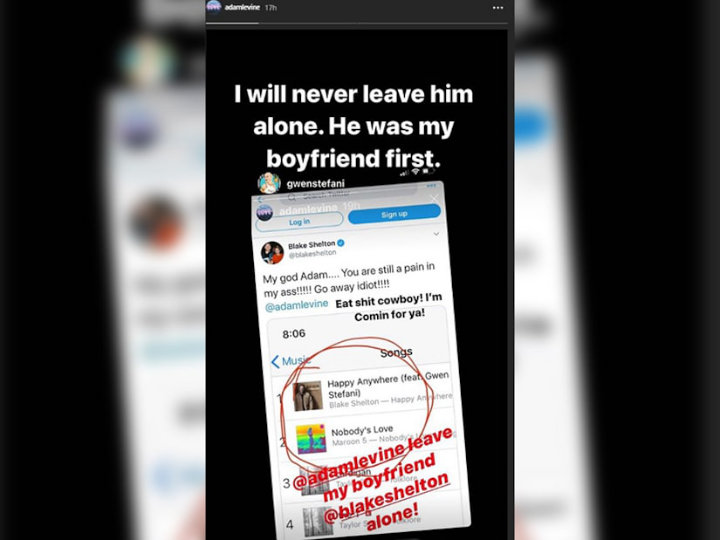 Adam Levine playfully hit back at Gwen Stefani's plea for him to leave Blake Shelton alone.

Blake then decided to bring Adam's wife Behati Prinsloo into the "fight" by posting a fake tweet from her back in 2018 that said, "Wow... I hate to say it but Blake is way better at this show than my husband. My husband can f**k off."

"Wow... Looks like some of @Beeprinsloo old tweets are resurfacing... I hope this doesn't affect their personal lives.. @adamlevine #teamblake," he penned alongside the post. 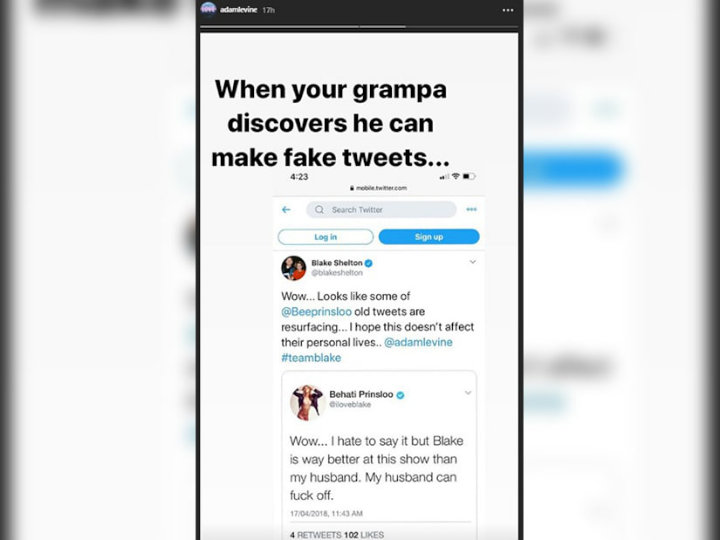 However, "Payphone" star Adam wasn't fazed by Blake's move, quipping, "When your grampa discovers he can make fake tweets..."

Blake Shelton on Parenting Gwen Stefani's Sons: It's a Scary Moment for Me

Woman Accusing Blake Shelton of Trying to Kill Her Gets Arrested