Joining Nick Cannon to pay tribute to the 24-year-old rapper who took his own life after surviving a police shooting last year, the 'Gangsta' songstress announces her social media hiatus to deal with the loss.

AceShowbiz - Kehlani is mourning the loss of her close friend Ryan Bowers. The San Diego rapper, who survived a police shooting following a suicide attempt last year, took his own life over the weekend. After news broke on Sunday, July 19 about his tragic passing, Kehlani took to Instagram to share a heartbreaking post.

"we stayed up every night together craaaackinnn the f*****k uppppp and talked about 'making it' when we lived at Chaz house," she recalled her memories with Ryan while posting photos of them together. "sneaking and smoking on the roof at the Ncredible office everyday. really horrible freestyles."

"i understood you, and when it came down to me going back to my hometown to figure it out myself at one point i felt like you was the only person who understood ME," she continued. "our last conversation will haunt me forever. you know why. i can understand why, i just wish it wasn't like this. my heart is broken. i thought s**t couldn't no sicker and it just did."

The 25-year-old singer implied that she spoke to Ryan and begged him not to commit suicide, "i begggggged you bro ... you are at peace and that's all i can find any sort of peace in myself. i can't believe i'm writing this. rest in peace to a real fighter... my real fam... i love you Ryan. f**k this year... on everything."

Apparently Ryan's loss is just another tragedy that Kehlani has to deal with this year so far. In a follow-up post on her Instagram Stories, she announced that she's taking some time off from social media to grieve in private.

"This year has been a lot," she wrote. "So much death. Not sure how to process it. Not sure how I feel being sent condolences so often or how I feel for surviving when people I love don't. Need to take some space."

"Gunna give myself a second, love y’all," she added. "Be blessed. (Just taking space from the socials to be with family and friends in real life. Don't make this some huge traumatic ordeal, I will be okay. Just need to process). Love." 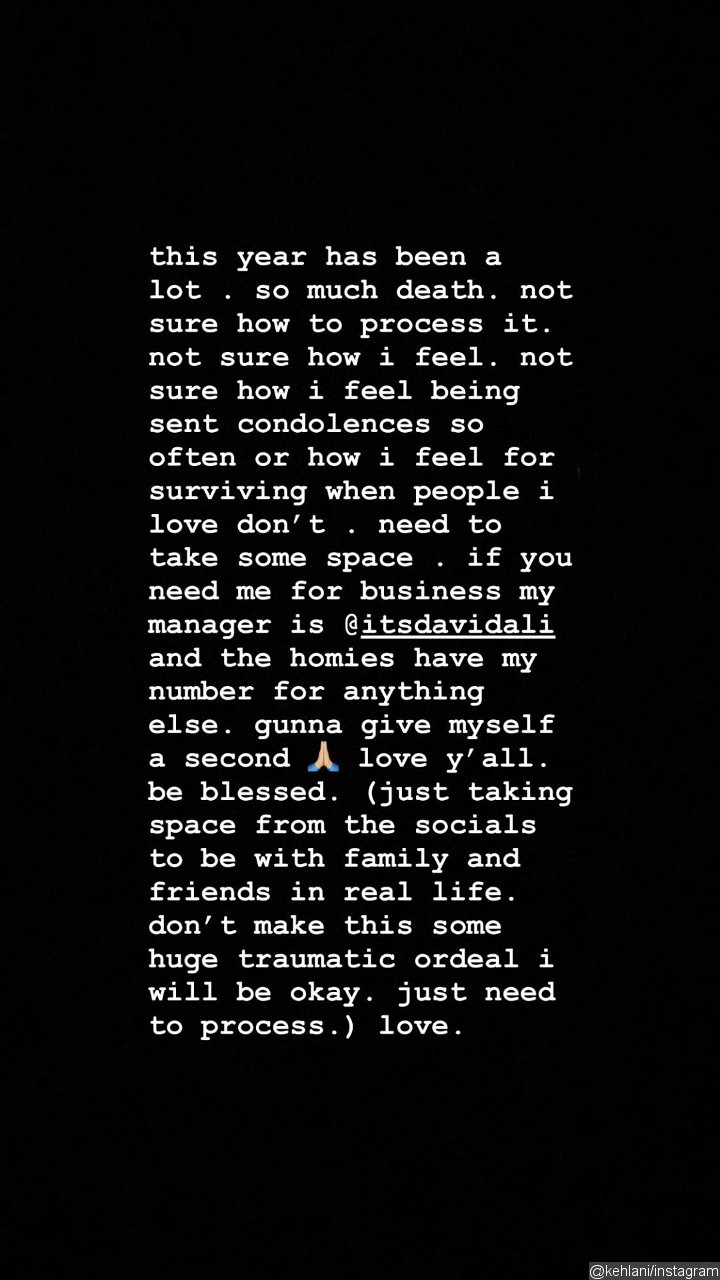 Nick Cannon has also taken to social media to mourn the death of Ryan, who was signed to the music division of Nick's NCredible Entertainment. "Just when I thought it couldn't get any worse... 2020 is definitely the most f**ked up year I've ever witnessed!" he wrote along with a black-and-white picture of him and Ryan.

Admitting that he himself recently struggled with the temptation to take his own life, he said of Ryan, "this powerful warrior actually had the balls to do it. I've said it once and I will say it again, this was the strongest dude I've ever met!"

"The Masked Singer" host went on recalling last year's incident that occurred between Ryan and the San Diego Police Department that left him in critical condition. At the time, police were called after Ryan threatened to slit his own throat. Upon the cops' arrival, Ryan approached them wielding a different knife, prompting one of the officers to shoot him in the upper region of his chest.

Ryan was in coma for months, but he eventually woke up and began his recovery. "I stood by his bedside and promised him that if he made it out & fought the good fight that I would make his dream come true and put his album out and share his story with the world," Nick wrote. "Even through his strength he would whisper to me that 'Everything Still Hurts'."

"His music was definitely his safe haven and it was amazing. Paying for lawyers, putting money in his pocket, even putting the music together all meant nothing because I feel like I failed my little brother," the 39-year-old comedian/rapper shared. "The Cops will get away with shooting another kid, everyone will just look at this as yet another loving farewell post, but to me @ryanbowersob was so much more than that."

"Once again my brother you have put this world in perspective for me. You would do that quite often because I never understood how someone who was experiencing sooo much pain could still laugh and smile through it all...I am certain that your energy will never die and your Spirit is eternal," Nick continued.

He went on expressing his regret for not being there for Ryan when he was at the final moment of his life, "so I ask you still to forgive me for letting you down Warrior. I can't help but think if I wasnt so engulfed in my own bulls**t I could've been there for you when you finally took your life after several attempts... F**k this place!!"

Kehlani Talks About Being Privileged After Coming Out as Lesbian