AceShowbiz - Jamie Foxx isn't falling for Kanye West's antics after his presidential bid announcement. The Academy Award-winning actor has thrown shade at the Atlanta-born rapper after the "I Love It" hitmaker announced his run for the 2020 U.S. election.

The post also featured a comment by DJ Hed, which read, "No more voting celebrities who've never held public office… If you wouldn't hire a plumber to work on the electrical wiring in your house why would you vote this way? America's obsession fame / celebrity is the endgame."

In his caption, Stephen wrote, "Kanye Trump. Fool u once shame on them fool u twice u and 2x fool. #justiceforgeorgefloyd #justiceforbreonnataylor and so many more. #ivehadenough of the clown s**t. Love for all who have love for all Leader of The New School. Leading with Love. Demanding not asking."

Agreeing with the former athlete, Jamie commented on the post, "Gottdamn right!!! Ain't got time for the bulls**t!!!" 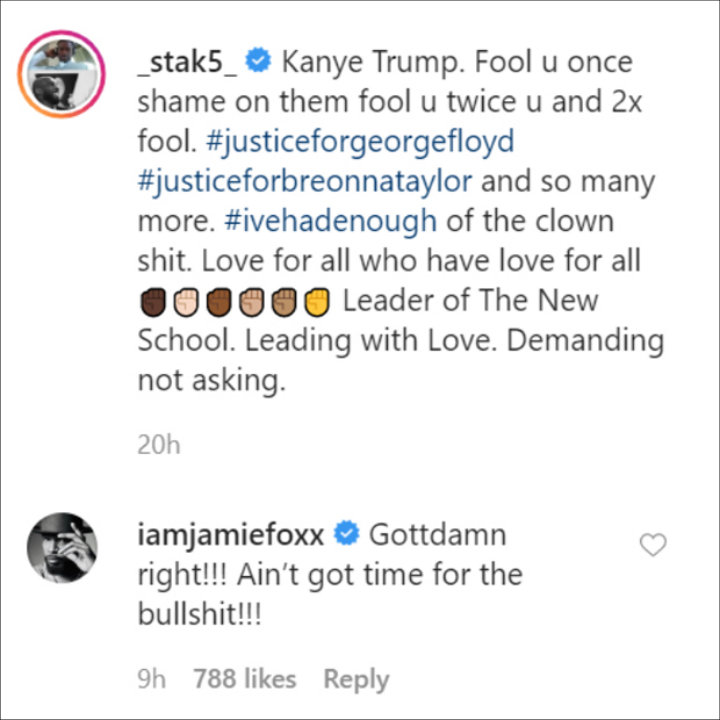 Jamie Foxx calls out Kanye West over his presidential bid.

Kanye divides his fellow celebrities after he announced that he's running for the White House at the upcoming election. "We must now realize the promise of America by trusting God, unifying our vision and building our future. I am running for president of the United States!" the husband of Kim Kardashian tweeted on Saturday, July 4.

Tiffany Haddish, Bob Saget, Octavia Spencer and Meghan McCain are among those who have mocked Kanye for announcing his candidacy, while the likes of Elon Musk, 2 Chainz, Masika Kalysha, Rose McGowan and Ty Dolla $ign have declared their support for the founder of creative content company DONDA.