The daughter of former senator John McCain believes that the 'Black Skinhead' rapper won't 'be taken seriously as a presidential candidate' due to his past behavior.

AceShowbiz - Meghan McCain is joining the list of celebrities who are anti-Kanye West after he announced his presidential run over the weekend. Taking to her Twitter account, "The View" co-host has thrown shade at Kim Kardashian's husband, whom she deemed unfit to run for the White House due to his past behavior.

"There is no woman on planet earth, celebrity or private who could behave as unhinged and erratic as Kanye has the past few years & be taken seriously as a presidential candidate," so the daughter of late senator John McCain tweeted on Sunday, July 5. Taking issue with the rapper's controversial comments on slavery, she added, "Women are punished for raising our voices on tv, let alone saying things like 'slavery was a choice'."

Commenting on Meghan's tweet, a follower compared Kanye to Marianne Williamson, who suspended her campaign for the Democratic nomination in the 2020 presidential election. Suggesting that the author/spiritual leader is even better than the Yeezy designer, the said user wrote, "Marianne Williamson > Kanye West." Not objecting to it, Meghan replied, "Hahahaha." 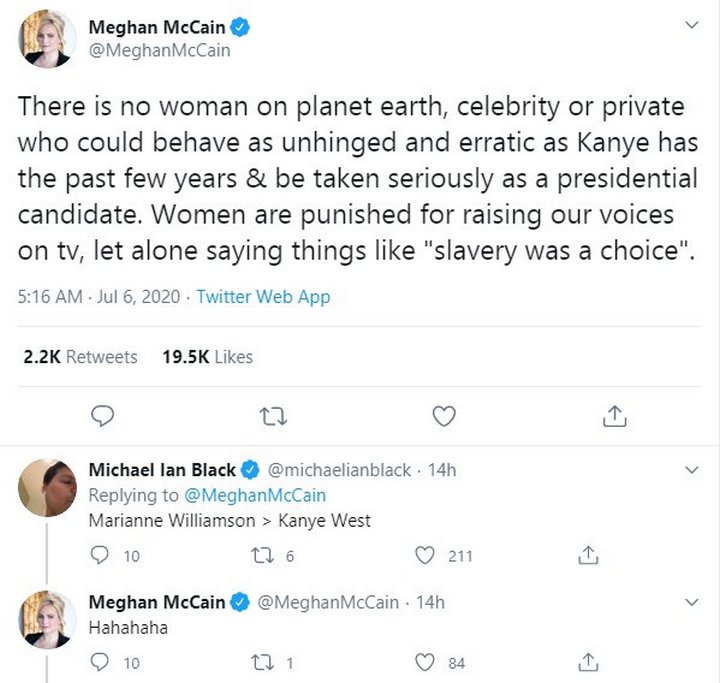 Another agreed with Meghan, writing, "I'm old enough to remember when one needed qualifications and government experience, among other qualities to be 'leader of the free world'. What a sad and pathetic place we find ourselves in." A third person chimed in, "Nobody is taking him seriously. It's a publicity stunt."

Kanye announced he would run for the 2020 presidential election on Saturday, July 4 as he tweeted, "We must now realize the promise of America by trusting God, unifying our vision and building our future. I am running for president of the United States! #2020VISION."

Elon Musk, 2 Chainz, Masika Kalysha, Rose McGowan and Ty Dolla $ign were among those who have declared their support for Ye, while the likes of Tiffany Haddish, Bob Saget and Octavia Spencer mocked Kanye for announcing his candidacy.