The unexpected passing of Waters, who was described as 'a brilliant storyteller', at 39 is confirmed through a statement released in the official Twitter account of the NBC show's writers.

AceShowbiz - "This Is Us" has lost one of its own. Jas Waters, who had writing credits on 18 episodes of the NBC family drama series, has passed away at the age of 39. News of her passing was confirmed through the official Twitter account of the show's writers on Wednesday afternoon, June 10, promoting many celebrities to express their condolences.

Among those were two of the show's stars, Mandy Moore and Susan Kelechi Watson. The actress playing Rebecca Pearson kept her message simple by tweeting, "Sending love and light to @JasFly's family and loved ones," while her co-star, who portrays Beth Pearson, wrote, "Incredibly shocked and saddened to have just receive this news. Blessed Light, fly with the angels." 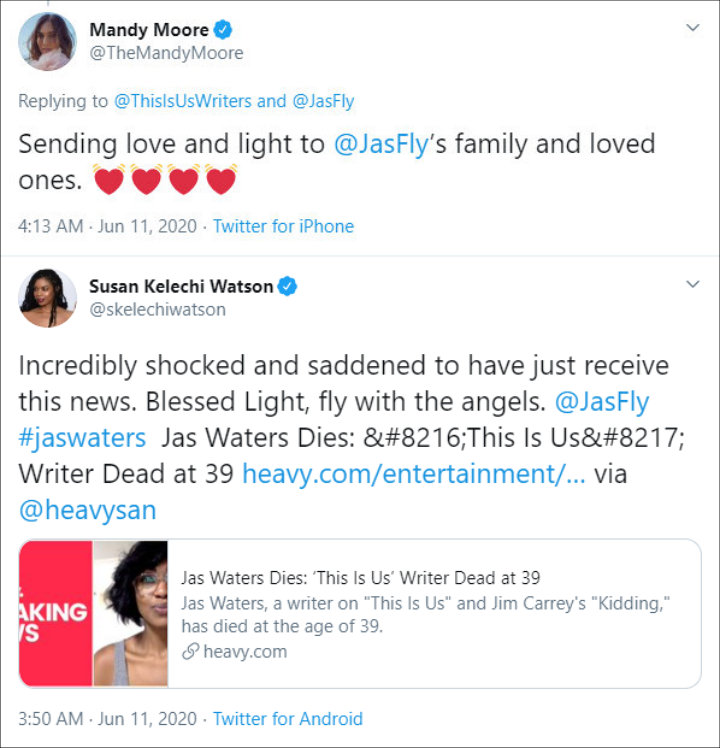 Mandy Moore and Susan Kelechi Watson reacted to the death of 'This Is Us' writer Jas Waters.

Also left shaken by the tragic news was the show's creator Dan Fogelman. In his tribute post, the 44-year old admitted, "This news took my breath away." He went on to remember the late writer by tweeting, "Jas was absolutely brilliant and had so many stories still to tell. She made an indelible mark on our show and my heart breaks for her loved ones. RIP."

The statement from the "This Is Us" writers' account itself read, "The entire #ThisIsUs family was devastated to learn of Jas Waters passing. In our time together, Jas left her mark on us and ALL over the show. She was a brilliant storyteller and a force of nature." It continued, "We send our deepest sympathies to her loved ones. She was one of us. RIP @JasFly."

'This Is Us' writers confirmed the passing of Jas Waters.

Outside the "This Is Us" family, Waters was also remembered by Issa Rae. Recalling their time working together, the "Insecure" star wrote, "I'll never forget being so excited to get an interview w/ @JasFly for Necole Bitchie back when I was working on ABG. I could feel her warmth through the phone. Over the years, I got to know & appreciate her even more. She was so generous, beautiful and REAL. I'll miss you, girl." 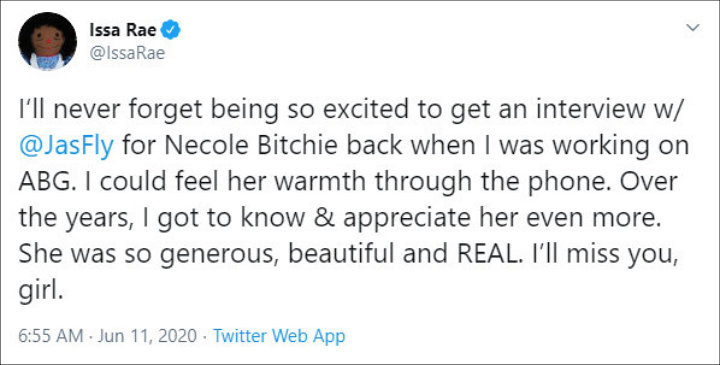 Another celebrity paying tribute to Waters was former "Glee" actress Amber Riley. "I can't believe I woke up to hearing you are gone @JasFly . You inspired me so much and challenged my thinking also," she tweeted. "I truly admired you as a writer and just as a black woman. We never got to work together like we wanted, but I’m so glad to have known you."

It was still unclear what might have caused the passing of Waters. She, however, had worked on Showtime's "Kidding" and had story credit for Taraji P. Henson's 2019 film "What Men Want". Before taking on the role of a screenwriter, she served as a columnist for Vibe magazine.

The Body Shop Under Fire for Its Ill-Timed Diss at J.K. Rowling Over Her Transphobic Stance

Mandy Moore Returns to Work One Month After Giving Birth