Watch: Kelly Clarkson Gives Soulful Touch to Madonna's 'Like a Prayer' for 'Kellyoke'

In the latest episode of 'The Kelly Clarkson Show', the 'American Idol' alum delivers a stirring rendition of the 1989 smash-hit with the help of her bandmates from their individual homes.

AceShowbiz - Kelly Clarkson has made a Madonna classic her own. On Thursday, April 30, the "My Life Would Suck Without You" hitmaker entertained fans and viewers of "The Kelly Clarkson Show" with a soulful rendition of the "Material Girl" singer's 1989 smash-hit "Like a Prayer" during her "Kellyoke" segment.

Performing the number from her self-isolation location in Montana, the Season 1 winner of "American Idol" replaced backup singers with multiple recordings of herself, and was joined virtually by a crew of her bandmates who did their parts from the safety of their own homes. She also got the assistance from music director Jason Halbert for the web cover.

Hours after sharing the cover via her show's social media account, the current judge on "The Voice" admitted to be missing her music crew. "Oh my gosh I love my band so much," she tweeted late Thursday night. "Hahahahahaha! I had no idea they were doing this and I am so happy right now! The pointing, the drama, the black and white sexy @iamjessicollins and @jasonhalbert on keytar. I miss my musical family." 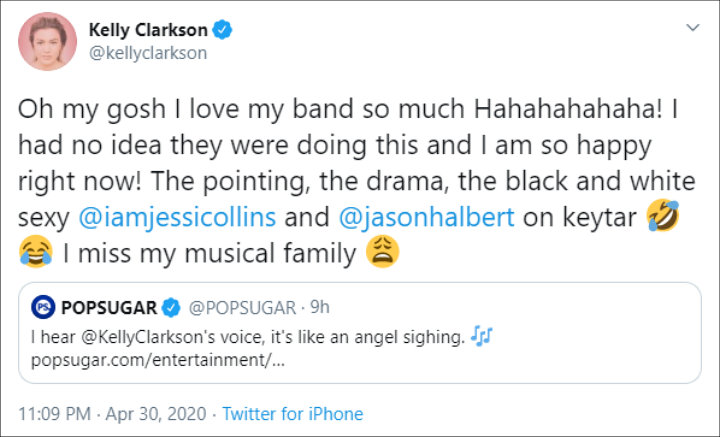 Clarkson has been covering other artists' famous tracks on her "Kellyoke" segment way before the coronavirus pandemic shut down the studio production of "The Kelly Clarkson Show". She had delivered Mariah Carey's "Vanishing" from the bathroom of her family cabin in March, and paid tribute to Kenny Rogers by performing "Sweet Music Man" a week later.

About how "Kellyoke" came to be, Clarkson's longtime music director Halbert spilled in a 2018 interview with Vulture, "I think because of how she started on 'Idol,' covering so many great songs on the show, when I first started with her, I used to get tons of emails from fans requesting that she cover certain songs."

"So I brought her the idea of, 'Why don't we do a fan request every day?' She loved the idea, and I think we've been doing it since almost the very beginning," he continued. "Whenever they were coming up with a concept for the show, that sort of morphed into 'Kellyoke'."

Kelly Clarkson Admits to Pooping in a Trash Can Backstage

Usher Disheartened by His Kids' Reactions to His Music