Courtney Stodden Exposes Chrissy Teigen's Bullying Tweets When She Was 16

Nine years later, the former wife of Doug Hutchison calls out the 'Lip Sync Battle' co-host for her old tweets to her with a message for the model to 'be better.'

AceShowbiz - Chrissy Teigen has been accused of being a "hypocrite" by Courtney Stodden. Having been fighting online bullying almost everyday, the model herself was apparently the perpetrator at one point in the past and one of her victims was Courtney.

In a video shared on her Instagram post on Tuesday, Aprii 28, the former teen wife of Doug Hutchison opened up about being the object of constant bullying by some celebrities like Chrissy and Anderson Cooper. Her video, however, was focused on the wife of John Legend, whom she accused of stalking her on social media almost nine years ago, when she was just 16.

"She stalked me. She harassed me. She bullying me," Courtney said in the more-than-five-minute video. She recalled being called a "whore" and "slut" by the model, before showing one of the tweets from Chrissy to her that read, "I hate you."

Acknowledging that Chrissy has been dealing with online trolls now, the 25-year-old blonde went on calling out the cookbook author. "You shamed a minor. An abused minor who was married to a predator at the time. I didn't even realize that and she's shaming me," she said. "It broke me. So, shame on you, Chrissy."

Hoping that Chrissy would become a better person now that she's a mother, the national spokesperson for PETA continued, "You have a baby girl... You and John are great parents. I don't think you're gonna sign your girl to marry marry a man older than John. But I hope you're gonna learn from this mistake. Because it affected me." She added, "I'm still blocked from your Twitter. I didn't do anything you. It's just hurtful."

In another post, Courtney shared screengrabs of Chrissy's bullying tweets to her. "This the is real @chrissyteigen," she captioned it, adding the hashtag #bully.

She also took to Twitter to recall the hurtful experience, writing, "In 2011 I was 16. @chrissyteigen started harassing me." She added, "Chrissy, using your platform to spread hate // and to compare a teenager to nazis is so disheartening to everyone who suffered from any kind of abuse. Chrissy, there are so many souls abused and in abusive situations right now and they aren't even fully aware. Learn from your mistakes please." 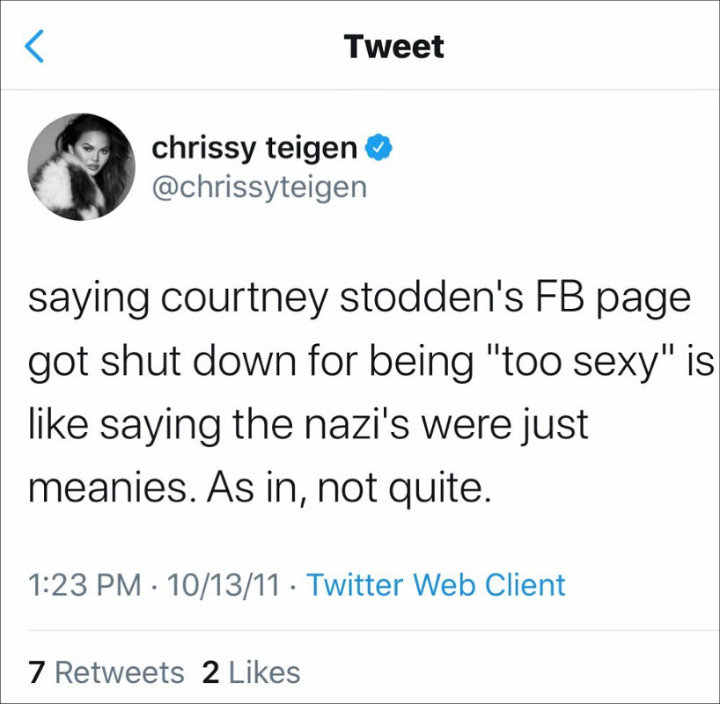 She concluded her rants with a message to all people that "bullying is never ok."

Reacting to Courtney's confession, one person sympathized with her, "@chrissyteigen is really disgusting for this. Also wondering why you were so creepily obsessed with a 17 year old girl that never did ANYTHING to you???"

Blogger Perez Hilton chimed in, "Everybody makes mistakes in their past. I'm sure @chrissyteigen will apologize for hers. She should." Another user believes that Chrissy is a changed person now, writing, "While I am behind you Hundred points symbol, I wouldn't say it is the current Chrissy, but it certainly is the unapologetic Chrissy at this point. I hope she reaches out for the sake of her integrity. People change, but you have to show it."

Chrissy has not responded to Courtney's claims.