French Montana on Hot 97 Declaring Him Winner in Hits Battle Against Kendrick Lamar: 'I'm Not Crazy'

However, some other outlets begged to differ, with Complex taking to its official Twitter account to compare the two stars' songs using information from both Billboard and the RIAA.

AceShowbiz - French Montana received backlash after he claimed that he would "outshine" Kendrick Lamar at festival stage because he had more hits. However, the statement may not be entirely baseless as the entire crew at Hot 97 listed the two rapper's bangers with French being declared as the winner.

For the graphic, Peter Rosenberg represented Kendrick, while Kast One played French's hit songs. With 6-4 decision, the "Coke Boys" rapper was named the winner. Catching wind of the satisfying results, French quickly took to his Twitter account to brag about it.

"I GUEST IM NOT CRAZY AFTER ALL," so he wrote on the blue bird app. "FRENCH MONTANA VS KENDRICK LAMAR HOT 97 TOUGHEST CRITICS SCORE 6-4 FRENCH MONTANA WINS WATCH FOR YOURSELF ! ITS GOOD TO STAND UP FOR YOURSELF TO ALL YOU UNDERDOGS OUT THERE . WE JUST TALKING HITS NOTHING ELSE BY THE WAY." 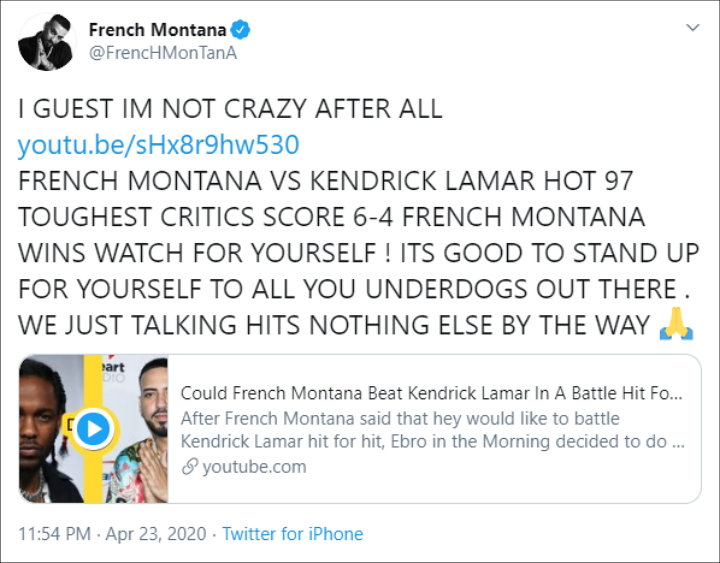 French Montana reacted to his victory.

However, some other outlets begged to differ. Complex took to its official Twitter account to compare the two stars' songs using information from both #Billboard and the #RIAA. Unlike Hot 97, Kendrick beat French with more hits, hot 100 entries and multi-platinum certified hits. "Men lie. Women lie. Numbers don't lie. We ran the numbers of Kendrick Lamar vs French Montana," the account wrote in the caption.

French, however, insisted that "them numbers all lies." He added in a comment, "U missing 20 more platinum plaques."

Akadmiks also had the same results. He wrote on Instagram, "Here is the accurate side by comparison Plaque for plaque. ALL RIAA pulled info." Once again, French jumped to the comment section to set the record straight, saying, "Most of kendricks features Too ! I never compared myself I just stood up for myself . we all now know kendrick one of the goats."

French sparked controversy with his remarks in a recent interview with Complex News where he said, "I could go against anybody. You could put somebody like Kendrick Lamar next to me on the same stage at a festival, I might outshine him. Not because I'm a better rapper, or whatever it is. It's just that I got more hits."

He went on explaining, "Kendrick Lamar got albums. He got masterpieces. But if you want to put us on the festival stage, I would outshine him because I have more hits than Kendrick Lamar."