The outspoken British journalist previously mocked the 'Stupid Love' singer over her upcoming appearance at a WHO press conference on the COVID-19 pandemic.

AceShowbiz - Piers Morgan has clearly underestimated Lady GaGa and her role in helping alleviate the crisis amid the coronavirus pandemic. Following the "One World: Together at Home" concert which she curated, the British TV host had to apologize to the singer after mocking her for her involvement with the World Health Organization (WHO).

When it was announced earlier this month that the "Alejandro" singer would attend a WHO COVID-19 press conference as a special guest, the "Good Morning Britain" host was being dismissive. "Why? Has she found a cure? Otherwise, we don't need a bloody singer there," he tweeted.

Piers, however, has changed his opinion on the "A Star Is Born" actress after the Sunday, April 19 at-home concert raised more than $127 million that will be used to arm healthcare workers with personal protective equipment. He tweeted on Sunday night, "I owe you an apology @ladygaga - this was a great initiative that raised a fortune, entertained people, & will help save lives."

The 55-year-old outspoken journalist went on admitting, "It was also a perfect illustration of a major star using their profile properly in this crisis. Congrats & sorry for originally questioning it." He also quoted GaGa's own tweet about the concert, in which she wrote, "I am so humbled to have been a part of this project. Thank you @GlblCtzn. Thank you @WHO. I love you." 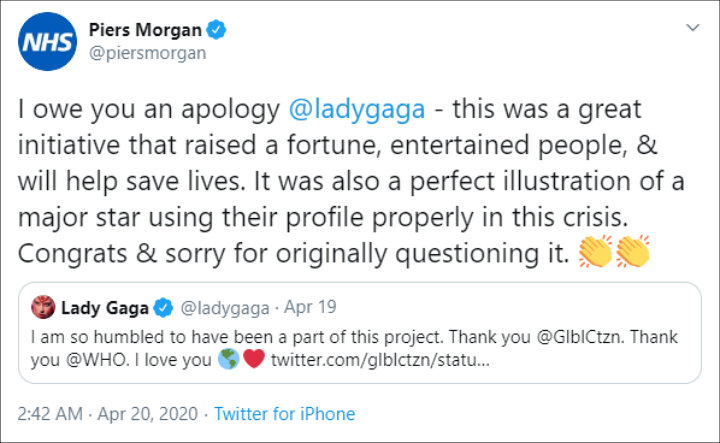 Piers Morgan apologizes for dismissing Lady GaGa's involvement with WHO.

The "One World: Together at Home" concert brought together stars like Taylor Swift, Paul McCartney, Elton John, Stevie Wonder, Maluma, Eddie Vedder, Keith Urban, Lizzo, Billie Joe Armstrong, Billie Eilish and her brother Finneas, as well as The Rolling Stones who performed songs to honor the healthcare workers, grocery staff, delivery drivers and all those risking their lives to serve others during the coronavirus crisis. GaGa herself teamed up with Celine Dion, Andrea Bocelli, John Legend and pianist Yang Yang for a rendition of "The Prayer".