After Italian Prime Minister Giuseppe Conte declared all concerts will be canceled until April 3, the One Direction member assures his Italian fans that he will be back in July.

AceShowbiz - Pop star Louis Tomlinson has postponed an upcoming show in Milan, Italy following a month-long government ban on all public events as a result of the coronavirus crisis.

The One Direction singer had been due to hit the stage at Fabrique on 11 March as part of his world tour, but he has been forced to pull the gig after Italian Prime Minister Giuseppe Conte declared all concerts across the nation will be cancelled until 3 April.

Schools and universities have also been closed, while sporting events will either be postponed or played behind closed doors in a bid to help officials halt the spread of the disease as the nation's death toll climbs to 107, with more than 3,000 people infected - the largest outbreak in Europe.

Louis announced the postponement of his tour stop on Thursday (March 05), posting on Twitter, "I was really excited to bring the Walls tour to Italy but the health and safety of my fans is more important than anything else."

Advising fans to "hold on to your tickets," he added, "Don't worry I will be back in July and I hope to see you all then." 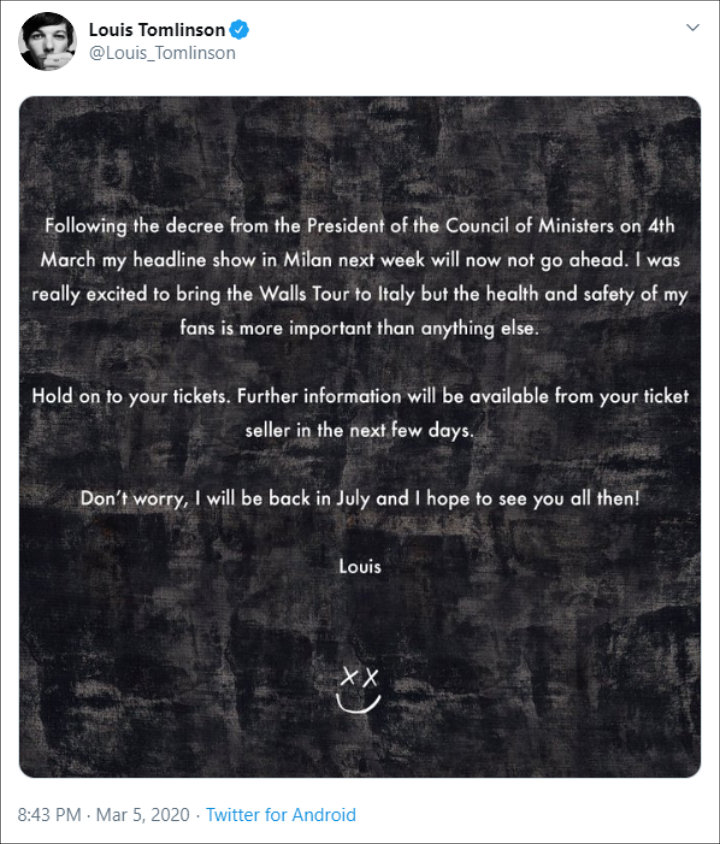 The Brit joins the likes of Green Day, Mariah Carey, Slipknot, BTS (Bangtan Boys) and Avril Lavigne in having to scrap shows amid coronavirus concerns, which has also prompted authorities in Miami, Florida to axe the 2020 Ultra Music Festival.

The annual three-day electronic music bash had been scheduled to take place from 20 to 22 March, but for the first time in 21 years, the city event will no longer be going ahead as planned, Miami Commissioner Manolo Reyes confirmed to the Miami Herald.

Dance stars Zedd, Flume and Gesaffelstein were among the artists set to feature at the rave.

The news emerges on the heels of the cancellation of this week's (ends March 06) Ultra Abu Dhabi, the United Arab Emirates offshoot of the festival, which had been due to include performances by Major Lazer, Zedd, Afrojack and Alesso.

Artist of the Week: Luke Combs