In response to one of his followers' comments, David makes a shocking revelation, saying that the divorce from the former 'Teen Mom 2' star bothers him 'but I'm not heart broken.'

AceShowbiz - Splitting from Jenelle Evans apparently is not entirely a bad thing for David Eason. The estranged husband of the former "Teen Mom 2" star shared on his Facebook page that he's "much happier" now without Jenelle, with whom he shares daughter Ensley.

"Glad u people think I am taking this so hard," David wrote on Tuesday, November 19. "Just so u all know I am so very much happier and so is Maryssa! Finally peaceful!" he added, referring to his daughter from previous relationship.

Some fans were being supportive to the former TV star and hoped he and Jenelle could work everything out for the sake of their daughter. "That's great," one wrote in the comment section. "That is all that matters is that you and your beautiful daughter are happy. It's not worth being unhappy. I hope that everything works out for you and her."

"Now maybe you can have a relationship with your family again your mom and sister and get your life together," someone else added. "This relationship was toxic from the beginning I'm happy your happy as I'm sure Jenelle is as well."

Meanwhile, another user said that David "wouldn't be human" if the split "didn't bother you any at all." The person continued, "Yall had a relationship and a family. It seemed toxic, but I wasnt there so I cant say here nor there. But all that matters is that the kids are happy and safe."

David responded to the comment with a shocking revelation. He told the person that it did bother him "but I'm not heart broken." He went on saying that he "wasn't in love" with Jenelle before adding that "there are much better people out there." 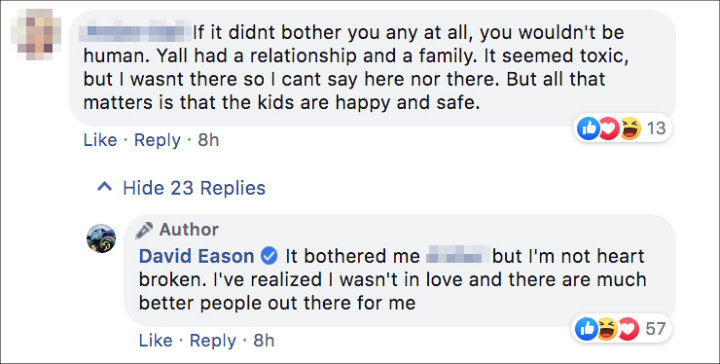 David Eason said that he 'wasn't in love' with Jenelle.

After Jenelle filed for divorce from him and fled their house, David multiple times took to social media to blast the MTV personality. Earlier this month, he called the 27-year-old "stupid." Additionally, David posted in now-deleted post a screengrab of another TMZ story regarding an alleged road rage incident involving Jenelle. "But this is okay?" he wrote, seemingly alluding that Jenelle wasn't a better parent than him.

Jenelle revealed on Thursday, October 31 that she had filed for divorce from David. "With time away from 'Teen Mom', I've started to look at my life differently and I know I need to make changes. I'm starting that now," she wrote on Instagram. "The kids and I have moved away from David."

"Nobody gets into a marriage expecting it to end but I know that's what is best for me, and for my kids. Today I've filed papers to start that process. I appreciate the support from everybody who has asked how I am. Me and the kids are doing great. We need some time to be together, but you'll hear from us again soon," she continued.