Jeffrey Marty says 'the State Attorney made the right call' by declining to file charges against his wife after the 'Clueless' star was arrested for alleged assault on her husband over the weekend.

AceShowbiz - Stacey Dash and her husband Jeffrey Marty remain together and strong despite recent alleged battery case. On Thursday, October 3, Jeffrey gave an update on the legal issue faced by his wife, stating that the case is now closed as prosecutors have decided not to press charges against the actress.

Expressing his relief at the outcome of the situation, he tweeted, "Today, the State Attorney made the right call by declining to file charges against my wife, @staceydash." He explained, "She was arrested over my objection at the time, but due to the pending investigation, I waited to comment until now." 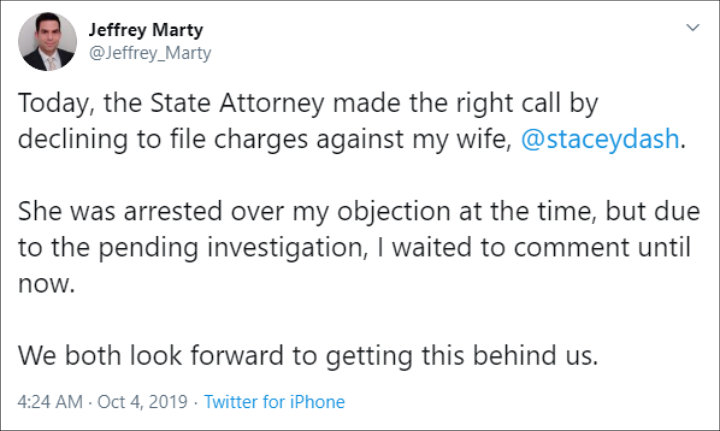 Jeffrey hinted that he and Stacey are ready to move on following the alleged domestic violence, adding in his post, "We both look forward to getting this behind us." The lawyer also pinned an old post featuring a picture of him and his wife kissing, with a Bible quote which read, "Though one may be overpowered, two can defend themselves. A cord of three strands is not quickly broken," written over it. 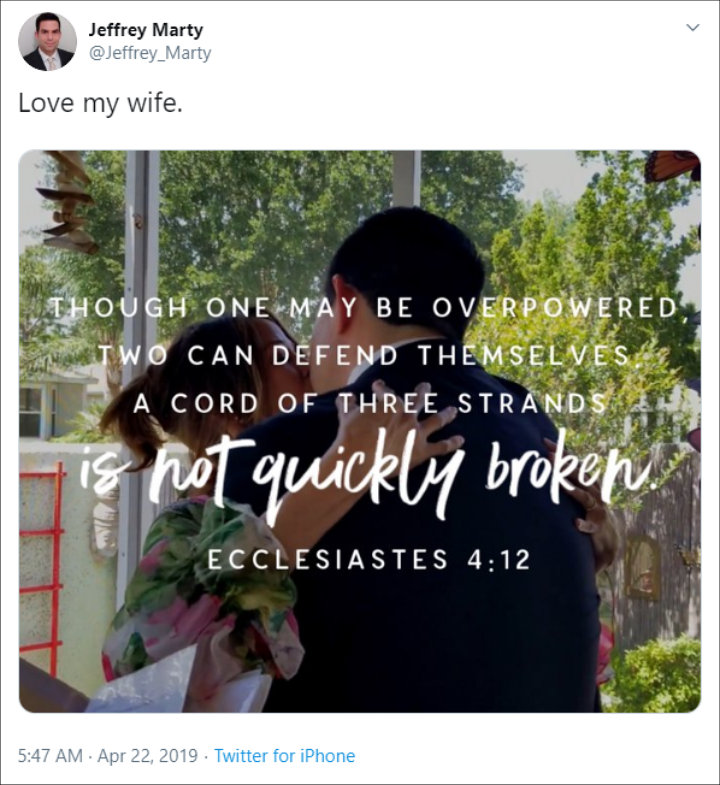 Jeffrey says he and Stacey are ready to move on after an alleged altercation.

Stacey was arrested on Sunday, September 29 after an alleged altercation with her lawyer spouse at their New Port Richey home. According to a police report, Jeffrey suffered "red scratch marks" on his left arm. She claimed she was acting in self-defense when Jeffrey put her in a chokehold as she argued with his 15-year-old daughter. The "Clueless" alum was released on Monday morning after Jeffrey paid the $500 bail.

Her lawyer later confirmed in a statement that the couple "had a marital dispute in their Tampa, Florida, suburb. Pasco County Deputies were dispatched to their residence. No charges were pressed by her husband, however, deputies arrested Ms. Dash peacefully, as a formality."

The lawyer added, "The marital dispute, while personal and unfortunate, has since been blown out of proportion. Ms. Dash is a domestic abuse survivor from a previous relationship and has championed for other abuse victims to speak up. The untruthfulness being reported saddens Ms. Dash and her family -- no further comments will be made and we ask that Ms. Dash and her family's privacy will be respected."

Stacey Dash Apologizes for Being 'Angry, Conservative, Black Woman' in the Past