Issuing a statement on Twitter, the estate for the late R'n'B singer asks people to treat the wax figure, which was unveiled on August 21 in Los Angeles, with respect.

AceShowbiz - It's only been a week since Madame Tussauds unveiled a wax figure of Aaliyah in Los Angeles, but people have already started altering it. This apparently got so worse that the late singer's estate decided to speak out and remind them not to do anything weird to the statue.

Some of the things that people did to the statue included changing her hairstyle and even applying a nude lip gloss on the statue's lips. Posting photos of the action on Twitter, her estate wrote along with the image, "We ask kindly that anyone visiting the Aaliyah wax figure @TussaudsVegas please treat it with respect, this has been a lot of years of hard work by her fans petitioning and her family's support! Below is inappropriate and unacceptable." 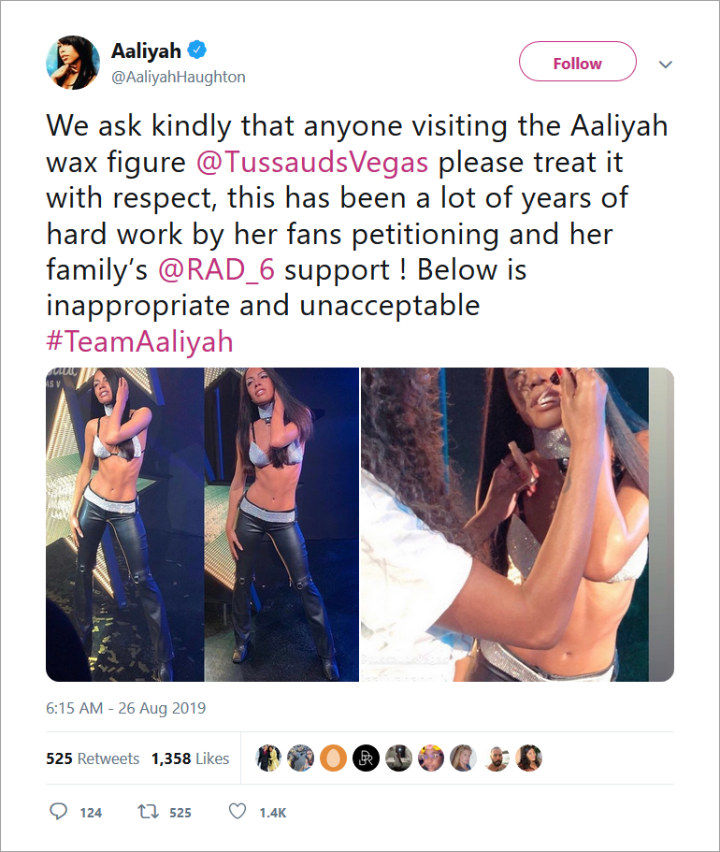 Following the tweet, a rep for Madame Tussauds assured Aaliyah's estate that the company has "artists on site daily that reset the figures and make sure they look their best every day."

Madame Tussauds debuted Aaliyah wax figure on August 21. Her statue saw her rocking a metallic bra and matching choker set, an outfit that the R&B singer wore during her "Try Again" era back in 2000. Her brother, Rashad Haughton, was involved in the production process of the wax figure. "I was involved in the process from the inception of the concept," he explained.

Noting that the team at Madame Tussauds made sure that both he and his mother were "comfortable and supported through an amazing but understandably emotional process," he added, "One thing we made sure to include was all of my sister's tattoos. They are all quite hidden because my sister chose strategic places for them due to her on-camera film work. We know how devout and knowledgeable her fans are and the great artists at Madame Tussauds have no limitations to their abilities when it comes to detail."