Her brother Rashad Haughton, who plays a big role in making sure the wax figure really captured the 'One in a Million' singer's essence, is also present at the ceremony.

AceShowbiz - On Wednesday, August 21, Madame Tussauds in Las Vegas debuted the newest addition, a wax figure of Aaliyah. Joining other fan-favorite famous figures in the museum, the wax figure of the late singer saw her in the outfit during her "Try Again" era in 2000.

The figure wore a metallic bra and matching choker set. Completing the style was her signature leather pants. "It was clear right away it would be the ‘Try Again’ look for our Aaliyah figure," Adam Morey, Studios Manager at Madame Tussauds in Las Vegas, said to VIBE of the figure which arrived 18 years following Aaliyah's tragic death. "The look has the sexy, edgy, timeless vibe we try to imbue in the Las Vegas attraction within all our creative choices."

"This set, rather than being a recreation of any one particular Aaliyah moment, was instead designed with a message to her fans in mind," Adam said. "It's a message that hopefully reflects her everlasting legacy."

Her brother Rashad Haughton was also present at the ceremony which took place at The Venetian Las Vegas. He dressed in black, with a plain black t-shirt under a black coat with black pants and black shoes and one photo that circulated online saw him posing with the wax figure of his sister. 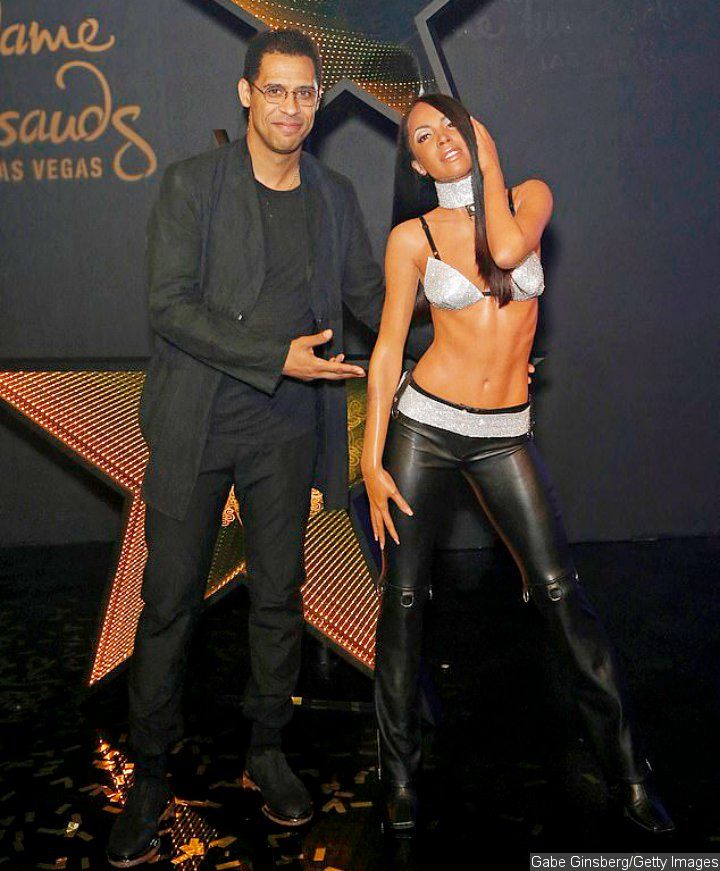 Rashad Haughton posed woyj the wax figure of his sister.

It was said that Rashad played a big role in making sure the wax figure really captured the "One in a Million" singer's essence and he was also given "unprecedented access" to the creative process. "I was involved in the process from the inception of the project," he explained via mail statement. "The team at Madame Tussauds welcomed a collaborative effort in choosing the pose and look of my sister's figure. They made sure my mother and I were comfortable and supported through an amazing but understandably emotional process."

"One thing we made sure to include was all of my sister's tattoos," Rashad added. "They are all quite hidden because my sister chose strategic places for them due to her on-camera film work. We know how devout and knowledgeable her fans are and the great artists at Madame Tussauds have no limitations to their abilities when it comes to detail."

Fans were loving how Madame Tuddauds executed the figure as they expressed their approval on social media. "You can't duplicate perfection like Aaliyah but #madamtussauds came damn close!" one fan wrote. "Aaliyah's wax figure looks so good, Madame Tussaugs did THAT!"

Aaliyah died on August 25, 2001 in a plane crash in the Bahamas after filming the music video for the single "Rock the Boat". Following her death, Billboard lists her as the tenth most successful female R&B artist of the past 25 years, and the 27th most successful in history.