Despite that, fans seemingly don't really buy the 21-year-old YouTube personality's words as one of them writing on Twitter, 'there's only one god that tana worships and that god is clout.'

AceShowbiz - Ahead of her wedding, Tana Mongeau has broken her silence on people who think that her and Jake Paul's whirlwind romance is done for clout. The YouTube personality recently took to her Twitter account to address the rumors through such an inspirational responses.

"I don't care if you think it's gonna last. OOPS!" she concluded. 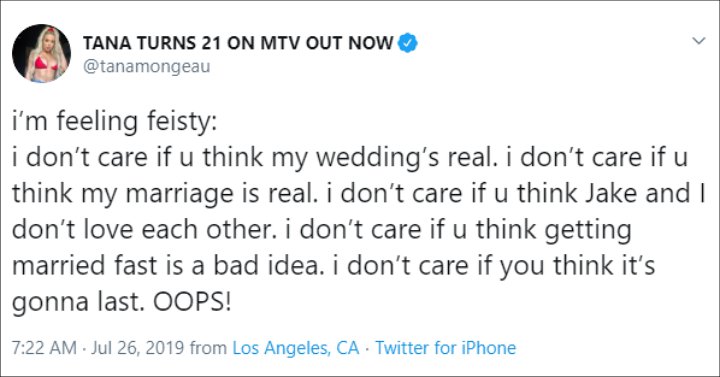 Tana Mongeau shared that she didn't care about what people said about her relationship with Jake Paul.

Fans, however, didn't really buy her words. "your wedding isn't real. your marriage isn't real. you and jake do not love each other. getting married fast is a bad idea and it's not gonna last. OOPS," one user wrote back, gaining 1.4K likes in no time. Another comment read, "It's truly insane that youre trying to convince people that this is a real marriage & yall are in love. It's CLEARLY for clout. In the words of @adam22 'there's only one god that tana worships and that god is clout' Everyone knows you do everything for clout, just live your truth."

Fans were not the only ones who seemed to be skeptical over the pair's relationship. Jake's brother Logan Paul appeared to hint that the things between the two were all staged as he explained how a fake relationship works. "There's no exchange [of money] but you can make money together. Like, say you make merch together, you probably split, like, 50/50 split," Logan said during a recent interview with Barstool Sports' podcast, KFC Radio. "I hope so. Like, what if my brother's, like, doing 80/20 with Tana? Oh, Tana, no! Tana, don't do it! Damn, he been doing 80/20. He's been doing 80/20."

Jake and Tana got engaged after two months of dating with Jake proposing to her at the latter's 21st birthday celebration in Las Vegas last month. The couple is set to tie the knot during a lavish Las Vegas wedding on July 28.