During an appearance on 'Lorraine' to promote her WOMAD performance, the 'I Try' singer claims to be 'a vampire' when asked about recent hospital stay, and asks for directions to another interview.

The singer appeared on ITV1's "Lorraine" on Tuesday, July 16, to promote her headline show at WOMAD.

However, viewers branded the interview "car crash TV" as she referred to herself as a "vampire", and questioned why she had to be up so early for the chat. She also asked host Lorraine Kelly for directions to another interview during the incoherent exchange.

After being asked about her recent stay in hospital Gray gave a bizarre response.

"I'm a vampire," the "I Try" singer told Lorraine. "I needed a blood transfusion... I just want to bite people! But that's illegal."

Although she is in town to promote her show at WOMAD on July 25, in Malmesbury, England, when was asked where the festival was, the 51-year-old just shook her head.

The singer then questioned why Kelly's show started so early and suggested that the broadcaster pre-record the interviews in the afternoon. Viewers took to Twitter to comment on the interview with many suggesting the singer seemed "a bit out of it".

"Car crash tv . Poor #Lorraine . Keeping it going . Bless your heart!," tweeted one. While another questioned: "Is macy grey (sic) out of it on #Lorraine @GMB." 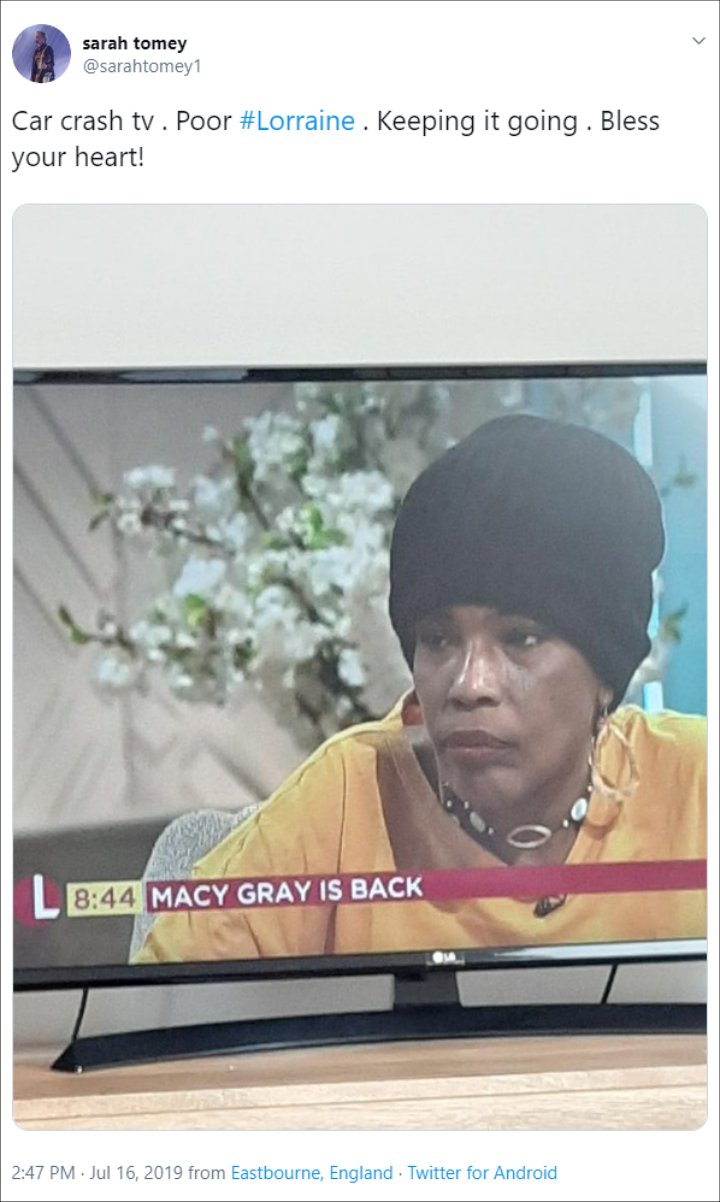 A viewer calls the interview a 'car crash tv.'

Another viewer felt the singer was 'out of it.'

Gray has previously admitted to being hooked on marijuana and ecstasy after her swift rise to fame following the 1999 release of her hit song "I Try". However, she quit using drugs cold turkey after becoming worried they were affecting her looks.

"I looked in the mirror one day, and I had bags (under my eyes) and my skin was doing weird stuff," she recalled in 2014 TV show "Oprah: Where Are They Now?". "That really scared me, so, I swear to God, I quit. I quit that day, just because of my looks."