Rumors of the YouTube stars' marriage first emerged after the two shared on Instagram several pictures of them flaunting their affection towards each other.

AceShowbiz - Tana Mongeau is still very much a bachelorette. Shortly after she sparked rumors that she had gotten married to fiance Jake Paul, the blonde beauty took to Twitter on Wednesday, July 10 to shut down the speculation once and for all.

Retweeting an article about their marriage rumors, Tana added in all-caps, "FAKE NEWS." She went on promising to let fans know when the two would exchange vows as saying, "We're still engaged b***h you'll know when we have a wedding." In her post, Tana also left a woozy face and a red heart emojis. 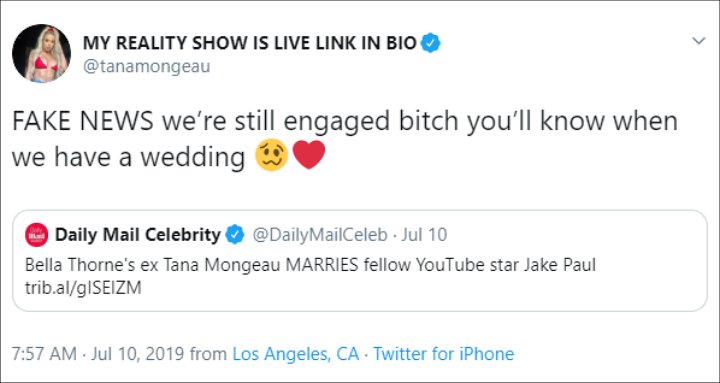 Rumors of their wedding first emerged after the two shared on Instagram several pictures of them flaunting their affection towards each other. Posting a photo of them kissing in a field, the brother of Logan Paul tagged the location, "MarriageToday," while Tana put the hashtag "The Pauls" in her post. This made people speculate whether the two had tied the knots.

Jake popped the question at Tana's 21st birthday party in late last month, and she said yes. "JAKE JUST PROPOSED," she cooed on social media while showing off her new engagement ring. People, however, though that their engagement was fake and accused them of clout chasing. Jake eventually debunked the rumors through a YouTube video that he shared on July.

Tana said in the video, "You're my fiance and nobody believes us. I'm now having to wear this ring at all times so people understand that we're actually engaged." Jake later jokingly threatened, "Everyone, you can go die." Elsewhere in the video, the two discussed whether or not Tana is going to take Jake's last name and revealed that they would be getting a prenup.

Prior to being engaged to Jake, Tana was in a relationship with Bella Thorne. It's unknown when they exactly split, but the "Famous in Love" alum announced their breakup back in February.