The 'Trainwreck' star gets uncensored in the Instagram picture as she shows her reality as a new mom, pumping breastmilk for her newborn son Gene Attell in the weekend.

AceShowbiz - Amy Schumer got real about her life as a new mom in an Instagram picture which she shared on Saturday, May 18. The 37-year-old comedian showed what her weekend is about now as she posted on her social media account the photo of herself pumping breastmilk for her newborn son Gene Attell.

The "I Feel Pretty" star had an automatic breast pump attached to her breasts while wearing a strapless nursing top in the uncensored image. She went makeup free with her hair up as she posed straight-faced and held two bottles.

"Guys what are we doing tonight?" she captioned the snap, adding the hashtags #schumerpump #ootd. She mentioned "Vanderpump Rules" star Stassi Schroeder in the caption and the reality TV star replied, "An OOTD for the ages." 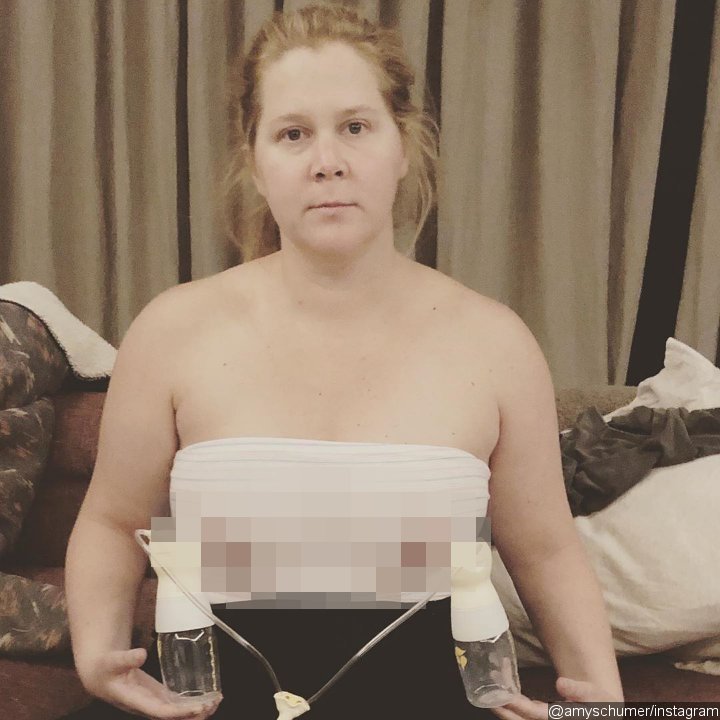 Amy Schumer shows her reality as a new mom in an uncensored Instagram picture of her pumping breastmilk.

Andy Cohen, who recently welcomed his first child, a son, commented on the post, "#OOTD." Nicole "Snooki" Polizzi, who is currently pregnant with her third child and second son, added, "Lmao."

In another post, the "Trainwreck" star expressed her gratitude to everyone who has helped her during her pregnancy and birth process. "Ok here's my post baby annoying post and my takeaway from pregnancy. Women are the s**t. Men are cool and whatever but women are f***ing warriors and capable of anything," she wrote along with a picture of her holding her baby on her chest.

She shared, "I was lucky enough to get to have a doula. Her name @domino_kirke @carriagehousebirth what do doulas do? I don't totally know But what she did was make me and Chris feel totally secure and supported throughout my pregnancy and the birth process. I really recommend getting one if you can."

"Doctor Brill and all the nurses and pediatricians at Lenox Hill and all the other hospitals i spent time in this year, thank you for everything," she continued writing in the lengthy caption. "I did Pilates with strong women and went for walks. I threw up violently and felt sick mostly every day of my pregnancy. Hyperemesis is real and it's awful. But f**k, what they say is true. The second you give birth it's gone."

"Friends I've had for 30 years or people who encouraged me to 'keep going' or telling me 'it will be worth it'. Thank you. Every woman I encountered is so willing to help and advise you and I felt all their strength. And you were right. Thank you ladies from my family. Chris, Gene and of course Tatiana," she concluded it.