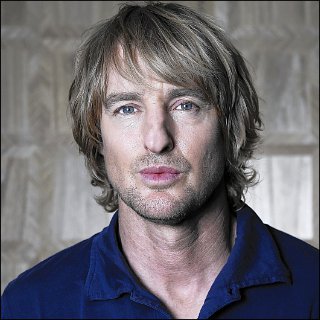 Known for his offbeat acting style and improvisational abilities that he often contributes in the movie he stars in to highlight the project itself, Owen Cunningham Wilson certainly has delivered a kind of rare quality to make him always be a special actor in the eye of every moviegoer. The second son of an advertising executive named Robert Andrew Wilson and photographer Laura Cunningham, this charming performer was born on November 18, 1968 in Dallas, Texas where he admitted spending most of his early life as a troublemaker, raising a lot of havoc not only in his family, but also at school which cost him being expelled from St. Mark's School of Texas in the tenth grade. Thankfully managed to finish his study at New Mexico Military Institute in Roswell to enroll in the University of Texas at Austin, it was during this college period that his life began to change its direction upon meeting a philosophy student named Wes Anderson, a Houston native who is one year his junior.

Finding out that they clicked to each other, especially in writing, the twosome then enthusiastically worked together to create a screenplay which thus was transformed into a short feature entitled "Bottle Rocket" (1993) starred by Owen himself and his younger brother, Luke Wilson. With the recommendation of the flick's producer also Wilsons' family friend, L.M. 'Kit' Carson, the picture satisfyingly attracted noted producers James L. Brooks and Polly Platt when it was screened at Sundance Film Festival held in the same year, leading the young team to receive a $5 million grant to make a full-length version of it for Gracie Films. Released by the year 1996, the film delightfully turned out to be a critical success despite its poor commercial result and so prompted Owen to head for Los Angeles accompanied by Luke, Wes, also his older brother, Andrew, to commence his journey of developing a fine career in the entertainment industry.

Afterwards landed a bit part in Jim Carrey's 1996 vehicle of "Cable Guy", this attractive blond guy slowly yet persistently worked on his path through various big screen projects for the rest of 1990s, like "Anaconda" (1997), "Permanent Midnight" (1998), "The Haunting" (1999), plus "The Minus Man" (1999) which placed him to enact opposite singer Sheryl Crow. Subsequently let themselves to be involved in the whirlwind love relationship, the couple sadly decided to separate in 2000 much to Owen's dismal, but on the other hand, the year ironically saw the beginning of his rise in the show business with Tom Dey's "Shanghai Noon." A hilarious action-packed buddy flick, the movie instantly soared to amazingly garner total lifetime gross of nearly 100 million U.S. dollar, thereby catapulted the striking hunk to widespread attention for sure besides gave him larger access to move further in the industry.

Shining under the spotlight as a potential comedic actor of the 2000s, Owen walked on quite effortlessly by the next year, shifting briefly to action-war genre in "Behind the Enemy Lines" before again generating laughter in "The Royal Tenenbaums" which he also brilliantly scripted with Wes to later obtain an Oscar nomination for Best Screenplay category in 2002. Seemingly unstoppable, the star kept scoring high in his subsequent pictures of "Shanghai Knights" (2003), "Starsky & Hutch" (2004), plus "Wedding Crashers" (2005), the latter even fantastically collected over $209 million and so unmistakably enhanced his profile among other funny-men in Hollywood. This glowing career of his apparently still goes steady by 2006 for he has already been selected to join the likes of Matt Dillon, Kate Hudson, also Michael Douglas in "You, Me and Dupree" while took time to provide the voice of Lightning McQueen in Disney/Pixar highly-anticipated animation of "Cars."

By the time of "You, Me and Dupree", Owen was romantically linked to co-star Kate Hudson after they were spotted hanging out together at several occasions. To make matter worse, he was said to be the third party in the actress' marriage to hubby Chris Robinson that they later decided to split. After a brief on and off relationship, Owen and Kate split and he focused more on his acting career, adding more film projects to his resume including the Paramount Pictures' comedy "Drillbit Taylor" and "The Darjeeling Limited" just to name a few. On August 26, 2007 the movie star was rushed to St. John's hospital in Santa Monica, California after a reported suicide attempt at his Santa Monica home. He was later transferred to Cedars Sinai Medical Centre in the Beverly Hills area and was said to be in "good condition." Mix-up speculation was mounting among people on what prompted him to end his life and in between times Owen issued a statement, saying "I respectfully ask that the media allow me to receive care and heal in private during this difficult time." He was later on discharged from the hospital on September 1st, less than a week after his suicide attempt, and being kept under constant observation.