In his upcoming interview with Tucker Carlson, the 'Donda' artist claims that people threaten to kill him for wearing MAGA hat and his controversial 'White Lives Matter' T-shirt.

AceShowbiz - Kanye West has further taken aim at Gigi Hadid and Hailey Baldwin after they publicly criticized his behavior during Paris Fashion Week, where the rapper/designer sparked outrage by donning a "White Lives Matter" T-shirt. On Thursday, October 6, he didn't mince his words while name-calling the two models.

In the post, Ye blasted Gigi and Hailey while gushing over model and influencer Vinetria. " 'THEEYY' don't want undeniable beautiful Black women to be put on their rightful throne," he said. He later took a jab at Gigi and Hailey, who defended Vogue editor Gabriella Karefa-Johnson after Ye fired back at the latter for criticizing his controversial design. "They want corny a** Gigi Hadid and nose job Hailey Baldloose [Bieber] to rally behind an obvious Corey Gamble level nonfashion industry plant," Ye said.

The 45-year-old rapper went on to say that critics "don't want to support [Beyonce Knowles]" and "want to shame Lizzo whenever she looses weight." He additionally praised Travis Scott (II) and Future, calling them the "real ones" for "recognizing their queen." He concluded, "This queen is going to change the trajectory of our people cause she's not promoting the things that kill our people that 'MEDIA' use to kill destroy and control our people." 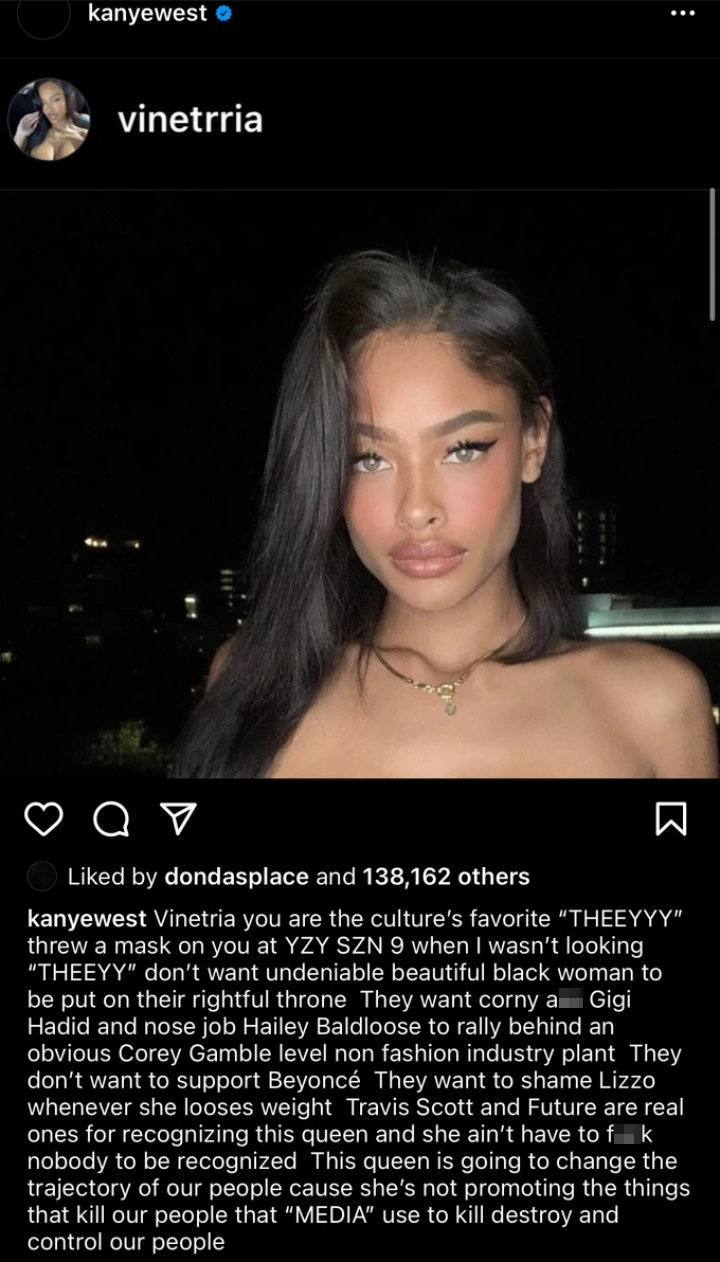 In a separate post, the Yeezy designer also called out famed Vogue Editor in Chief Anna Wintour. "I consider Anna two be an industry friend. But all her dolls had something to say," he penned, seemingly referring to Gigi, Hailey and Gabriella. He added, "It was cool for Gab to give her opinion on my art and say she didn't like it but when I rebutted I was made to be a bully. And she allowed all that. But watched from the sidelines when the Kardashians kidnapped my child on her birthday."

That aside, Ye also made headlines for his eyebrow-raising statements he makes in his upcoming interview with Tucker Carlson which is set to air later 5 P.M. ET. During the sit-down, the Chicago rapper addresses the controversy surrounding his "WLM" T-shirts while also criticizing his ex-wife Kim Kardashian.

He also reveals that he's threatened for wearing his "WLM" T-shirt. "I had someone call me last night and said anybody wearing a 'white lives matter' shirt is going to be green-lit. That means they are going to beat them up if I wear it. I'm like, you know, 'Okay, green light me then,' " he shares.

Elsewhere in the interview, Ye also talks about Kim and how she dresses. "Kim is Christian, but she has people who want her to go to Interview magazine and put her ass out," the "Donda" artist says. "She's a 40-year-old woman with four black children. This is how fashion treats you."

Not stopping there, Ye also weighs in on the criticism that his "girl friend" Lizzo receives over her weight loss, likening it to a black genocide. "The media wants to put out a perception that being overweight is the new goal when it's actually unhealthy," he notes. "It's actually clinically unhealthy. And for people to promote that, it's demonic. It's genocide of the black race."

Kanye West Further Slams Adidas After Their Partnership Is 'Under Review'