Trashing her short-term boyfriend whom she dumped after they were caught kissing, the former 'Teen Mom' star calls the musician a 'habitual' liar and accuses him of being abusive toward her.

AceShowbiz - Farrah Abraham's sudden breakup with Mack Lovat is getting uglier. Two days after ending her brief romance with the musician, the reality TV star has exposed her ex-boyfriend by leaking his explicit picture to the public.

On Wednesday, June 8, the former MTV star took her Instagram Story to share a screenshot of Mack's text messages to her. Along with it, the guitarist sent her what appeared to be his "d**k" picture which she included in her Story.

In the image, a man, presumably Mack, stood in front of a mirror while lifting up his shirt and seemingly exposing his genitals, which Farrah covered with an emoji icon. "do u miss him? He misses u," he wrote to Farrah, seemingly referring to his private parts.

Not amused by what she saw, Farrah wrote over the screenshot, "I get the universe message. Don't give anyone a chance anymore, don't let people come out in public, unless they are public, & globally know or I'll have some one telling me were dating but to the world they don't know me."

She went on telling her ex, "Right clown don't send me d**k pics! Get some f**king help & keep my name out of your mouth! You were blocked for a reason ! Gross." In a separate Story, she called Mack a "habitual lier [sic]" who allegedly acted "abusively" toward her.

Farrah further dissed Mack as writing, "Any dude who steps outside with me could be in press so I guess don't hang with a star if you don't want to deal with it." She also posted a paparazzo photo of them that she edited to cover Mack up, adding, "Yet he was on a carpet the night before."

Farrah was spotted packing on the PDA with Mack last week during a date at a Los Angeles park. However, on Tuesday, she appeared to have had a change of mind. "I decided not to date Mack. He could not handle public attention well," she told E! News. 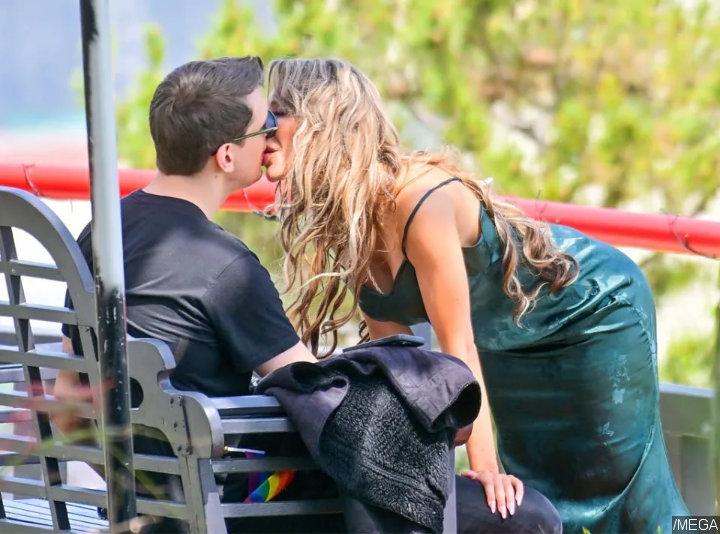 Farrah Abraham and Mack Lovat were caught kissing on a date last week.

She explained her decision, "I'm more confident in my life at this time and while I'm dating on new terms and rules from my 12-step principles program and taking it easy, I look forward to dating as I'm the happiest I've ever been in my life and I want to share that with someone special."

Putting her 13-year-old daughter Sophia as her priority, the "Teen Mom" alum shared, "I know what she would not approve of. I look forward to my daughter meeting someone who is worthy of being embraced by our family as I know this clearly from dating 10 years on and off."

"At this time, I separate giving someone a chance and my family life as that is best for my parenting style," she continued. "I'm at a university full time & working on my comedy TV specials. I need someone who can keep up and not make me feel like a sugar mama."

Speaking to TMZ, Farrah trashed Mack as she accused him, "Sometimes people turn into monsters with press. Happy I found out now."

Meanwhile, Mack, who plays with band Minus Gravity which is signed to Capitol Records, told The Ashley's Reality Group that he "never agreed" to a relationship.