When responding to the fat-shaming, the 'In Da Club' hitmaker insists that he is unfazed by the criticism as saying, 'They're just teasing me because they know I can drop the weight.'

AceShowbiz - 50 Cent has finally clapped back at haters who fat-shamed him. The "In Da Club" hitmaker insisted that he's not "ashamed" of his body after being mocked over his weight following his performance at the 2022 Super Bowl halftime show.

Making use of his Instagram account on Thursday, February 17, the hip-hop star shared a screenshot of a news headline that read, "50 Cent claps back at his Super Bowl fat-shaming haters with sweet merch." Underneath the screengrab, he wrote, "I call this teasing me, They're just teasing me because they know i can drop the weight."

"That's why i laugh with them. Fat shaming only applies when your [sic] ashamed of your fat," 50 Cent, whose real name is Curtis James Jackson III, continued. Letting the trolls know that he's able to laugh it off, the "Just a Lil Bit" rapper added, "LOL."

Before posting his response to fat-shamers, 50 Cent used all the attention he was getting to promote some of his merch. He shared that he'd be selling the ensemble that he was wearing for the performance on Twitter, writing, "Get your G-Unit Tanktops & Headbands Now." He also added a pic of him rocking the attire, proving to the body shamers that he's fine with his body. 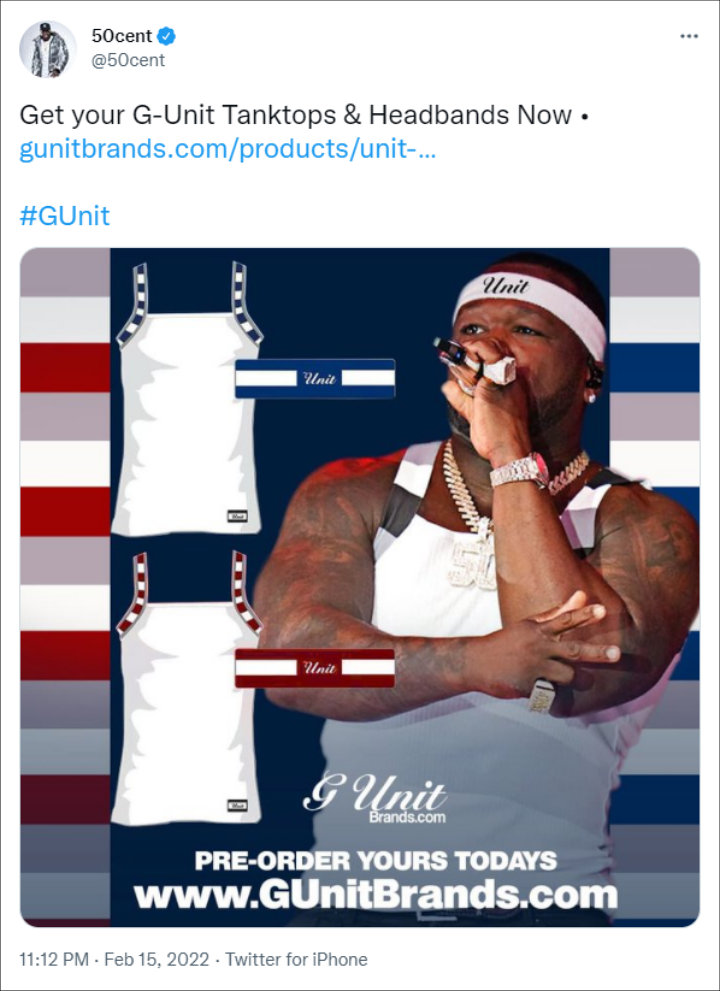 50 Cent took the opportunity to promote his merch amid criticism over his body.

50 Cent was fat-shamed after he performed at the big game on February 13 at SoFi stadium in Inglewood, California. For his part of the roughly 12-minute performance, the rapper spit a few bars from his mega-hit "In Da Club" while hanging upside down. Upon watching the unique stage act, social media users bullied him as they thought he appeared to have put on a few pounds.

While 50 Cent didn't exactly address the fat-shaming at the time, he took to Instagram to post a meme of D12 rapper Bizarre hanging upside down in the 2004 "My Band" video. Underneath the photo, he asked, "Who the f**k did this?"