After the 'Black Adam' star clarifies he previously supported the comedian because he was not aware of the latter's N-word scandal, the political commentator remarks, 'routine steroid injections does not make someone a man.'

AceShowbiz - Candace Owens has slammed Dwayne "The Rock" Johnson for retracting his support for Joe Rogan. Further affirming her support for the podcast host over the COVID-19 misinformation controversy on his Spotify series, the conservative political pundit has mocked the wrestler-turned-actor for changing his stance.

Candace quickly jumped in the conversation after the "Jungle Cruise" star claimed he has now become "educated" to the whole story. "The Rock turning his back on Joe Rogan is so emblematic of why these fickle Hollywood types are never to be taken seriously," so the 32-year-old tweeted on Sunday, February 6.

The author, who currently hosts political talk show "Candace", went on suggesting that Dwayne gained his muscles from steroid injections. "Remember fellas-routine steroid injections does not make someone a man," she added. 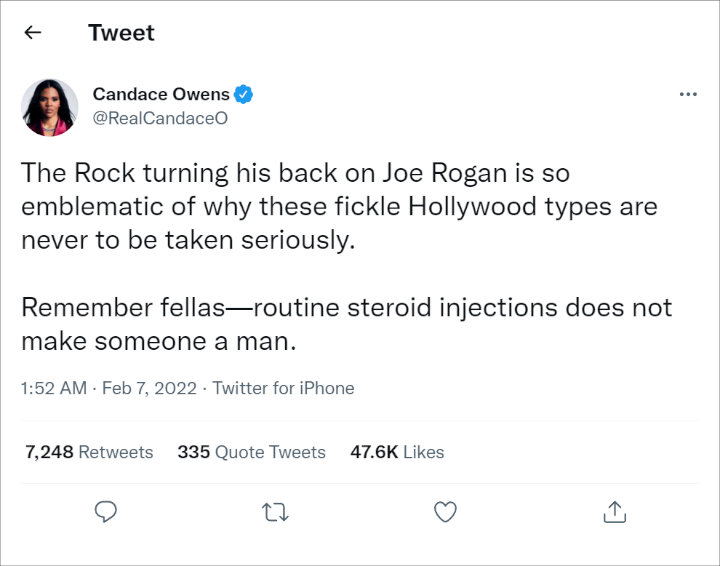 Dwayne previously praised Joe after the latter addressed the controversy regarding COVID misinformation on his "The Joe Rogan Experience" podcast. "Great stuff here brother. Perfectly articulated. Look forward to coming on one day and breaking out the tequila with you," the "Black Adam" star commented underneath the comedian's Instagram post.

The former WWE star, however, later changed his mind after learning of Joe's videos in which he used the N-word and called black people "apes." He tweeted on Saturday, "I was not aware of his N word use prior to my comments, but now I've become educated to his complete narrative. Learning moment for me."

As for Candace, she has previously showed her support for Joe when mocking Prince Harry and Meghan Markle's response to the controversy. After the couple asked Spotify to make "changes" regarding the COVID misinformation, the Republican political commentator wrote on Twitter, "Everyday Harry and Meghan wake up and think 'how can we make millions more people around the world hate us?' "

" 'Oh, I heard Joe Rogan has 50 million unique listeners - let's write an open letter indicating our inherent self-importance, and demand Spotify begin censoring him,' " Candace continued. Further shading the Duke and Duchess of Sussex, she added, "Next up from Harry and Meghan--a one on one sit down with Oprah declaring that Truckers everywhere are racist to their 75% white and extraordinarily wealthy son."

Joe himself has apologized for his "regretful and shameful" actions for using the N-word. When addressing the clips posted by singer India.Arie, he claimed that the clips were made up of "out of context" moments from "12 years of conversations" on his "The Joe Rogan Experience" podcast. Still, he acknowledged that "it looks f**king horrible."

"I know that to most people, there is no context where a white person is ever allowed to say that word, never mind publicly on a podcast. And I agree with that now, I haven't said it in years," Joe explained. "It's not my word to use. I am well aware of that now, but for years I used it in that manner... I never used it to be racist because I'm not racist."

Candace Owens Dumps Donald Trump for Acting 'Rude' to Her