The 'This Is the End' star is accused of being privileged after dismissing YouTube personality Casey Neistat's complaint about having been robbed in Los Angeles.

AceShowbiz - Seth Rogen has come under fire after seemingly normalizing crimes in big city. The actor/writer came under fire after he dismissed someone's complaint about having been robbed in Los Angeles while defending the city.

On Wednesday, November 24, YouTube personality Casey Neistat tweeted, "so our cars got robbed this morning because Los Angeles is a crime riddled 3rd world s**thole of a city." He then expressed gratitude towards the L.A. Police Department for arresting the criminal and retrieving all the stolen belongings, "but tremendous appreciation to the hardworking officers at the @LAPDWestLA who not only arrested the motherfucker but they got all of our stolen goods back."

Replying to the tweet, Seth wrote, "Dude I've lived here for over 20 years. You're nuts haha." He also disagreed with the notion that L.A. "is a crime riddled 3rd world s**thole of a city," declaring, "It's lovely here. Don't leave anything valuable in it. It's called living in a big city."

Casey argued, "i can still be mad tho right? feel so violated." Seth then responded, "You can be mad but I guess I don't personally view my car as an extension of myself and I've never really felt violated any of the 15 or so times my car was broken in to. Once a guy accidentally left a cool knife in my car so if it keeps happening you might get a little treat."

The 39-year-old then reiterated his earlier statement as saying, "Also it sucks your s**t was stolen but LA is not some s**thole city. As far as big cities go it has a lot going for it." 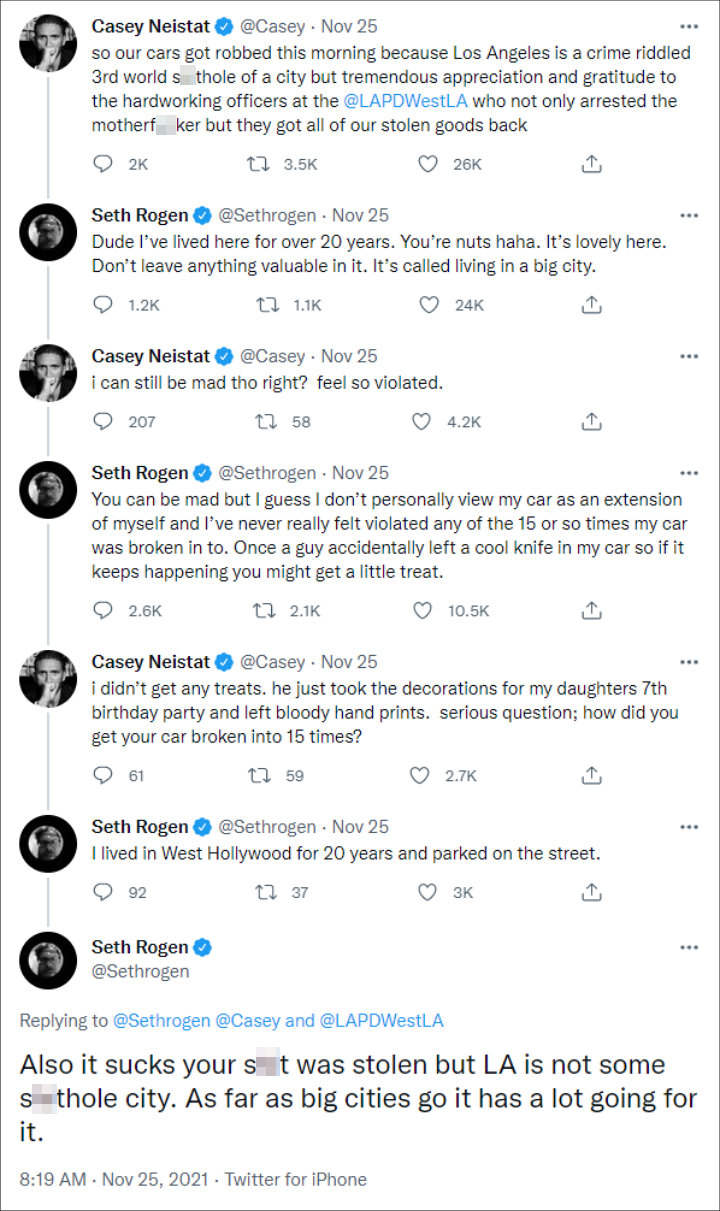 After seeing the conversation, people quickly took side, with many accusing Seth of being privileged. "I, too, am unbothered when one of many cars gets broken into. I just ask my assistant to get it all cleaned up and repaired. What's the big deal?" Tablet Magazine's Noam Blum sarcastically said. He added, "Viewing crime as some quaint reality of urban living akin to deer eating your vegetable garden is some bulls**t Hollywood-goggles romanticization of something that has no redeeming value and doesn't require some loss of humanity to prevent."

"You know, people talk about how this or that statement embodies 'privilege,' and 95% of the time it's total bulls**t, but this... yeah," political commentator Cathy Young tweeted. Daily Caller reporter Dylan Housman wrote, "Multi-millionaire celebrity explains to you why having your car broken into isn't a big deal and you should just get over it."

"Why is it ok? It may not be a huge deal to someone with [tremendous] wealth, but it certainly is for someone who's struggling. Might be the difference between making it & not. And regardless, the idea that it's just ok...cost of living...is ...am unhealthy one," entertainment journalist Katherine Brodsky commented.

Another user wrote, "Lol says the guy who lives in a several million dollar mansion far from the tent city homeless drug users. Having a lot going for it is not accurate as more has been taken from it during this decline." Someone else tweeted, "How about taking your privilege and doing something about that?"

Washington Post contributing columnist Sonny Bunch also disagreed with Seth as writing, "I don't think 'my car's been broken into 15 times' is doing the pro-Los Angeles work Seth seems to think it's doing here." He, however, stressed that his "dumb" statement doesn't negate his brilliant works, "Always annoying when you tweet something like this and people are like 'SeTh RoGeN wAs NevEr FunNy,' f**k you, KNOCKED UP and THIS IS THE END rule. He just tweeted something dumb, who among us, etc."

A few, meanwhile, agreed with Seth that the car burglary didn't justify someone from giving the city such nickname. "Well done. That guy can feel however he does-but it's how he expresses it that pisses me off," one person explained. "Say you feel violated. Don't equate that to a city where 10mil ppl live & the '3rd world' (a term wildly outdated itself). It's the constantly aggrieved w/no responsibility taken for me."

Another added, "that's the same everywhere big guy, theft isn't a felony till you cross a certain amount of value. if you gonna be snarky you need to do better, all our dead relatives watching us right now and you come with this?"

After catching the heat, Seth responded again on Twitter. He wrote, "A lot of people come at me and talk s**t on Twitter hoping I'll engage with them publicly and give them attention, but instead I DM them and tell them to go f**k themselves privately. It's a lot more fun."