When giving her fans and followers a personal first glimpse at X Æ A-Xii's nursery, the 'Genesis' songstress says that she starts making mural in her 17-month-old son's room after having 'a rough day.'

AceShowbiz - Grimes has treated her fans to a personal first look at her son's nursery room. The "Oblivion" songstress shared a picture of X Æ A-Xii's room on her social media platform after confirming that she is still staying with Elon Musk despite their split.

Taking to her Instagram Story on Wednesday, October 6, the 33-year-old posted a photo of her baby X drawing freely on the door. "We had a rough day, but we made up for it by starting a mural in x's room [white love emojis]," she captioned the snap.

In the picture, a partially completed mural above the 17-month-old boy's crib could also be seen. The paintings featured sketches of a castle with a dragon towering over the building. Above the light switch, there's also a small drawing of a ballerina. 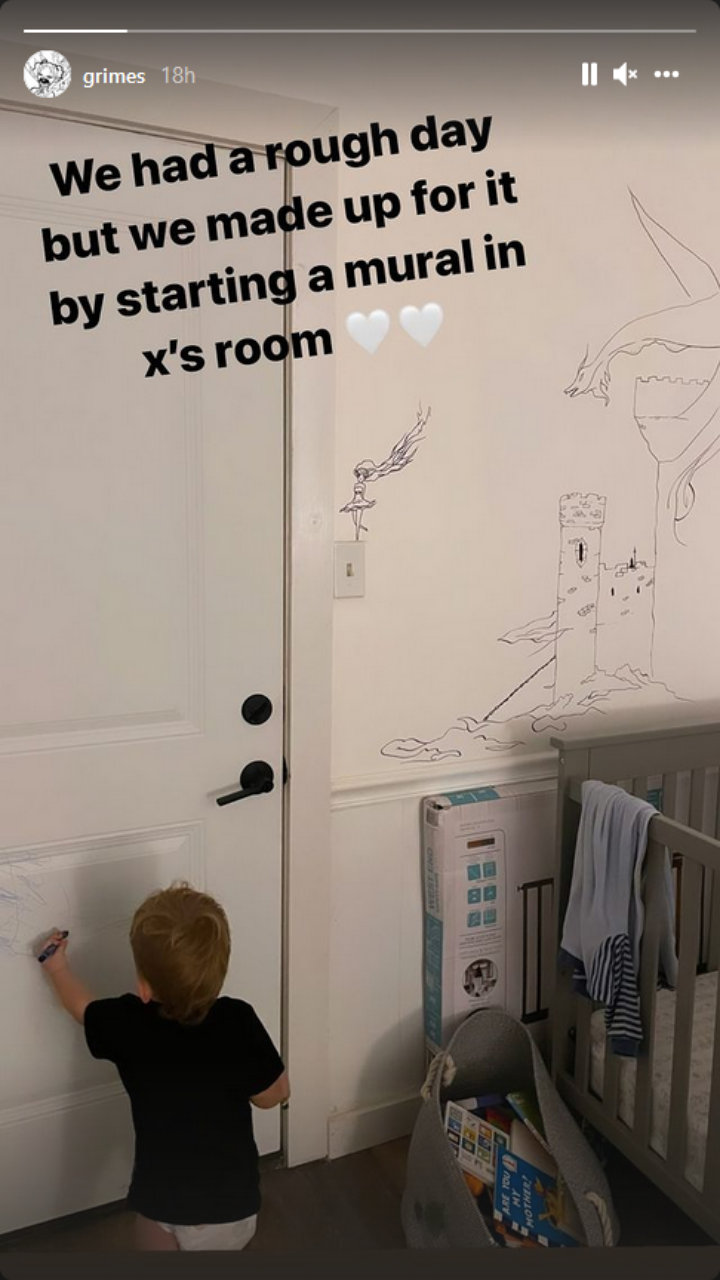 Grimes and Elon went separate ways in September. The SpaceX founder was the first to reveal their split. "We are semi separated but still love each other, see each other frequently and are on great terms," he announced.

Elon then cited their hectic schedules as the reason behind their split. "It's mostly that my work at SpaceX and Tesla requires me to be primarily in Texas or traveling overseas and her work is primarily in LA," the tech mogul explained. Despite their separation, he said that Grimes is still staying with him, while "Baby X is in the adjacent room."

Recently, Grimes also confirmed that she's still living with Elon after trolling paparazzi with Karl Marx's book titled "The Communist Manifesto". She wrote in an Instagram post she shared on October 2, "Full disclosure I'm still living with e and I am not a communist."

In her note, Grimes revealed that she was "really stressed when paparazzi wouldn't stop following [her] this [week]." The "Genesis" singer went on to say, "But then I realized it was opportunity to troll."

Previously, Grimes had voiced a similar sentiment in her new song "Love", noting that she faced "privacy invasion" by paparazzi. When releasing the music video of her new track on her Instagram page, she admitted that she wrote her tune "in response to all the privacy invasion, bad press, online hate and harassment by paparazzis" she has been experiencing since the breakup news broke.