The Draco Malfoy of the 'Harry Potter' film series falls to the ground during a celebrity golf match in Kohler, Wisconsin that requires him to be taken away on a cart.

AceShowbiz - Tom Felton had an emergency medical situation during a celebrity golf tournament. The 34-year-old actor passed out while playing at Whistling Straits in Kohler, Wisconsin on Thursday, September 23.

The British star, who was participating in the match, suddenly fell ill and collapsed to the ground, according to TMZ which first reported the news. Tournament medical staffers rushed to help the Draco Malfoy depicter in the "Harry Potter" film series.

It's unclear what condition that triggered the episode, but Tom was conscious. In one of the pictures obtained by the site, the actor appeared to be smiling while he was surrounded by staffers. He was then loaded up on a cart and taken off the golf course. His current condition is unknown. 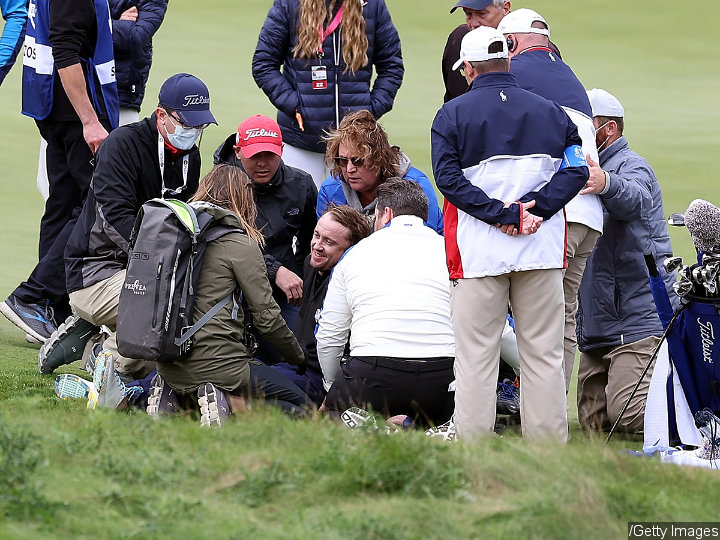 Tom Felton was conscious after collapsing on a golf course.
See also...

Tom was reportedly representing Ireland in a star-studded version of the Ryder Cup Tournament, which is set to begin on Friday, September 24, with golfers from Europe and the United States. The three days of competition were postponed last fall due to the coronavirus pandemic.

The medical emergency happened just a day after Tom turned 34. On Wednesday, the "Rise of the Planet of the Apes" star marked his birthday with a thoughtful post reflecting on his journey so far. "33 years done - good lord it's been so much fun getting here - yet, somehow, I still feel the best is yet to come," he wrote along with his black-and-white selfie uploaded on Instagram, "thank you all for your love , support & sense of humour - let's keep a good thing going - to the next 33 xx."

Tom rose to fame for his portrayal of Harry Potter's foe Draco Malfoy, a student belonging in the Slytherin house, in all eight movie adaptations of J.K. Rowling's novels. Following the end of the film series, he starred in 2012's "The Apparition", 2018's "Ophelia", recurred on "The Flash" series and landed a lead role on 2018's "Origin". His acting career aside, he is an avid golfer and has participated in several tournaments over the years.