In the footage that she sends to her husband, the former 'Smash' star can be seen kneeling on a bed in an unbuttoned white shirt, lacy blue bra and black underwear.

AceShowbiz - David Foster loves it when Katharine McPhee is being flirtatious. After his singer wife sent him a video of herself kneeling on a bed in an unbuttoned white shirt, a lacy blue bra and a black underwear, the "David Foster: Off the Record" star called her a "hot mom."

On Tuesday, September 21, the 37-year-old beauty shared a screenshot of her text exchange with her husband on Instagram Story. In the chatbox, she could be seen sending the said clip and wrote, "I'm an underwear model now."

Having been left amused by the footage, David flirted back by noting, "Vava vavA-voom." He went on to gush, "Hot mom-I tried u a bit ago but u are obviously busy stripping!! U look amazing!!! Wow!!!" In response, his spouse replied, "Stripping indeed."

In the caption of the post, the former "Smash" star simply penned, "Texts with the husband @davidfoster." 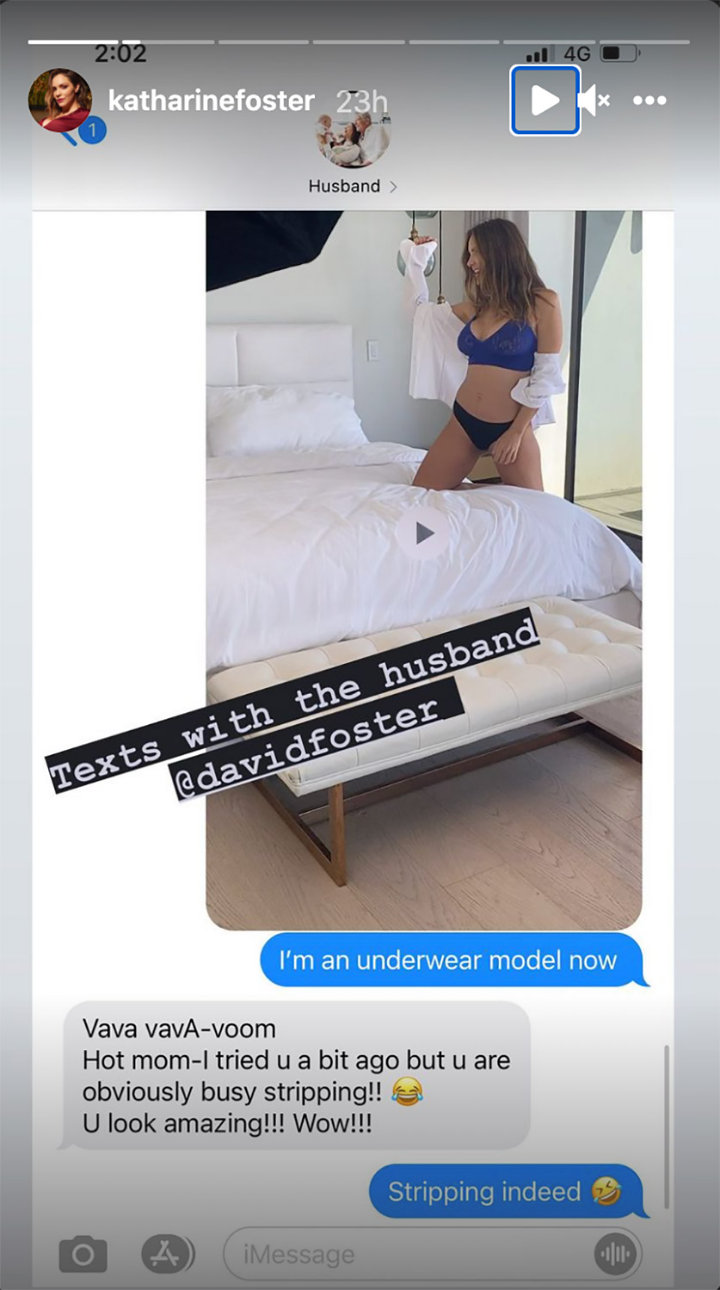 On the next day, Katharine turned to her Instagram feed to post an image from her photoshoot with brand MINDD." She quipped in the accompanying message, "i know i know... this screams 'look at me!' but really will you? looking for the GenZ affirmations. @minddbra."

The comment section has since been flooded with positive feedback from many, including Lindsey Vonn who exclaimed, "Crushing!!" Amanda Kloots added, "Hahahaha YES MAMA! We are looking and liking what we see!" Becca Tobin, in the meantime, sent out four clapping emojis.

Katharine and David tied the knot in 2019. The couple then welcomed their first child together in late February and named their baby boy Rennie David Foster.

The season five's runner-up of the "American Idol" was previously married to Nick Cokas before getting divorced in 2016. As for the 71-year-old composer, he has gotten married four times before to Linda Thompson, Rebecca McCurdy, B.J. Cook and Yolanda Hadid, but all four ended with a divorce.