The former girlfriend of Scott Disick shares a screenshot of her text message to her father Harry Hamlin, in which she explains that her racy dress is just part of 'fashion.'

AceShowbiz - Amelia Hamlin didn't completely ignore her father's feelings when she made a jaw-dropping appearance at a London Fashion Week event. The young model has apologized to her dad Harry Hamlin after she almost bared all in her completely see-through dress over the weekend.

On Monday, September 20, the 20-year-old took to Instagram Story to share proof of her apology to her dad. She posted a screenshot of her text message to the 69-year-old actor on the family's group chat. "Sorry for my nipped [sic] dad it's fashion," so Amelia wrote.

The Story appeared to serve as a clapback to her critics as well. In the caption of the screenshot, Amelia wrote, "For the people concerned about Harry Hamlin."

While Harry has not responded to her explanation in the screenshot, her mother Lisa Rinna has reacted and she was all supportive of her daughter. "I just saw lol," so the "Days of Our Lives" star replied. Playing down the racy look, the 58-year-old actress agreed with her daughter as noting, "It's fashionnnnnn." 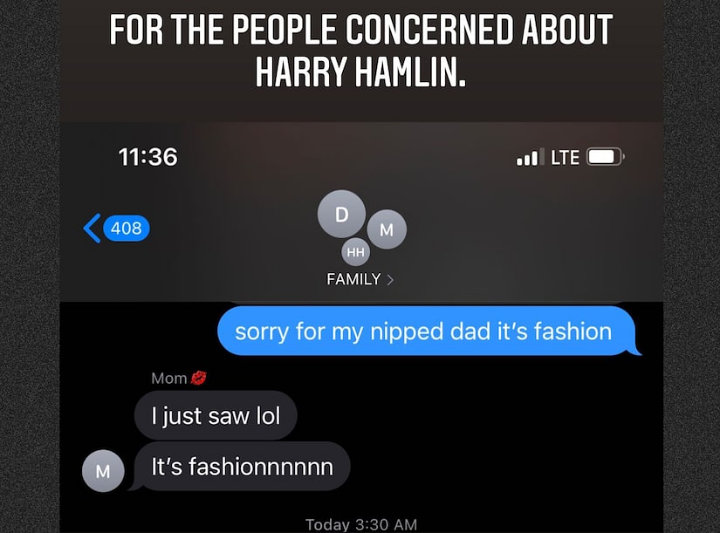 Amelia Hamlin shared a screenshot of her apology to her father Harry Hamlin.

Amelia left almost nothing to the imagination with her daring look when attending a party for Perfect Magazine and NoMad London on Sunday. For the event, the former girlfriend of Scott Disick wore a see-through mesh ensemble that bared her nipples.

The bold outfit comprised of a halter top and slit skirt that didn't hide much of anything as the model opted to go braless. "Free the nipple I guess," she teased on her Instagram Story, alongside a pic of her sexy outfit.

Her mother Lisa wasn't the only one who approved of her look that night as her sister Delilah was ready to steal her style. Commenting on Amelia's photos, the 23-year-old wrote, "I'll borrow this next plz." Her stylist Jordan Marx also gushed via his Instagram Story, writing, "F**king slay, queen."

Steve Harvey Gushes Over How Happy Lori With Boyrfriend Michael B. Jordan

Dionne Warwick Questions Saweetie's Name: Why Is It Not 'Sweetie'?