While the Instagram model wears her crystal chain dress for her early birthday celebration, the daughter of Lisa Rinna wears see-through mesh ensemble when attending a London Fashion Week event.

AceShowbiz - Jordyn Woods and Amelia Hamlin had a thing in common this weekend, despite being thousands of miles apart. Both stars made jaw drop with their daring looks for different occasions which they attended separately.

On Saturday, September 18, Jordyn turned heads as she showed up at her early birthday celebration in a barely-there dress. She left very little to the imagination as she rocked a chain dress which was adorned with crystals by AREA.

The former BFF of Kylie Jenner, however, managed to keep her modesty as she appeared to wear nipple pasties and nude-colored underwear. She paired her sexy dress with a pair of Amina Muaddi's viral Cinderella inspired heels with a flared heel and crystal details.

The social media personality, who will turn 24 on September 23, threw a lavish party at The Nice Guy for her early birthday celebration. She walked hand-in-hand with her boyfriend Karl-Anthony Towns as they headed into the venue.

The pair were seen having a lot of fun at the bash, singing and dancing while cozying up to each other. The NBA star gave her a Patek watch and Birkin as birthday gifts, which she showed off on her Instagram Story.

Meanwhile, over in Europe, Amelia made a jaw-dropping appearance when attending a London Fashion Week event. On Sunday, the 20-year-old model wore a see-through mesh ensemble when attending a party for Perfect Magazine and NoMad London.

The bold outfit comprised of a halter top and slit skirt that didn't hide much of anything as the daughter of Lisa Rinna opted to go braless. "Free the nipple I guess," she teased on her Instagram Story, alongside a pic of her sexy outfit. 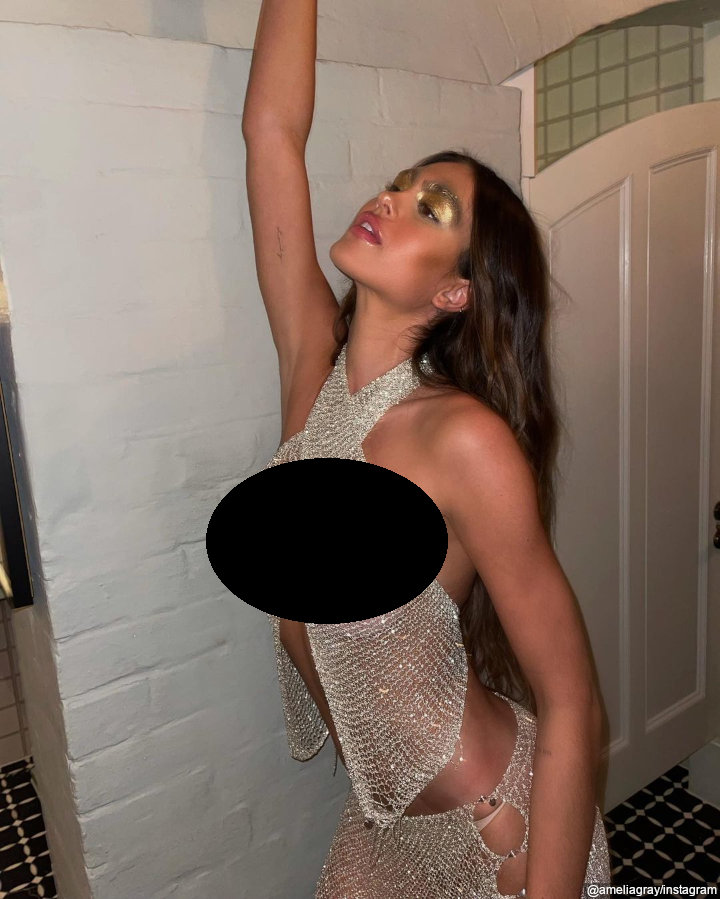 Amelia Hamlin showed off her daring look on Instagram.