After giving Stephanie Shepherd a luxurious gift for her 32nd birthday, the 'Keeping Up with the Kardashians' alum is praised by her former assistant, saying that her loyalty and generosity are 'unmatched.'

AceShowbiz - Kim Kardashian has gotten Stephanie Shepherd emotional over a luxurious birthday gift. The former "Keeping Up with the Kardashians" star has left her former assistant in tears with a $25,000 Hermes bag.

On Sunday, September 19, the 40-year-old reality star gifted Stephanie a lavish Kelly bag for her 32nd birthday that moved her to tears. In a video shared on Stephanie's Instagram Story, she could be seen crying after opening the luxury brand's iconic orange box to find the bag inside.

Upon opening the dust bag, Stephanie immediately screamed, "This is so crazy," before she broke down in tears. Kim, who was surrounded by her friends, said, "Don't cry, don't cry! Just wear it in good health," as the duo embraced. The Hermes Noir Black Epsom Sellier Kelly 28 bag retails for $24,999.00 per an eBay listing with good knock offs costing roughly $3,000.

Holding up the coveted purse, Stephanie continued to say, "This is so nice," through tears. In response, the SKIMS founder joked, "Don't drop a tear on the bag!" Stephanie then replied, "Oh my god I was going to buy a knock off. I sent the knock off and was like, 'Do you think anyone would know?' " 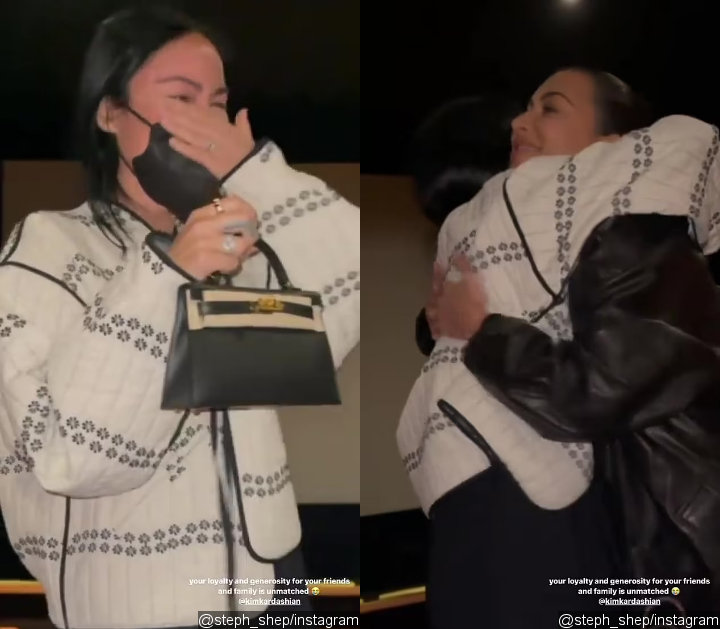 Over the video, Stephanie wrote a caption, thanking Kim for her generous gesture. "Your loyalty and generosity for your friends and family is unmatched," she praised the reality star. Stephanie was Kim's personal assistant and eventually the Chief Operating Officer of all Kardashian West Brands from 2013 to 2017, before she was let go after she felt "unfulfilled career-wise."

In 2019, however, Kim and Stephanie seemed to rekindle their friendship. They both had made it clear that though things didn't work out professionally there was "never a feud." Stephanie continues to be part of both she and Kourtney Kardashian's inner circle, most recently appearing in several SKIMS campaigns and also serving as a columnist for POOSH's website.