A screenshot circulates online of the 'Save Your Tears' singer's alleged reaction to the rapper's new collaboration with Normani called 'Wild Side', but it has been debunked.

AceShowbiz - Ariana Grande has no ill feelings towards Cardi B. After the former Nickelodeon star was accused of dissing the Grammy Award-winning rapper on Twitter, it has been claimed that the whole thing was a sham.

On Thursday, July 15, following the release of Cardi's new song with Normani Kordei called "Wild Side", a screenshot circulated online of Ariana's alleged liked tweets, which included one that shaded the Bronx femcee. It read, "Cardi's verse ruined the song, I can't listen to it without being irritated …."

@manisposition, who allegedly posted the original tweet, later seemingly followed it up with other posts which read, "I DELETED SO F**KUNG (sic) FAST" and "let me deactivate chile. Imma follow my close mutuals on my spam." 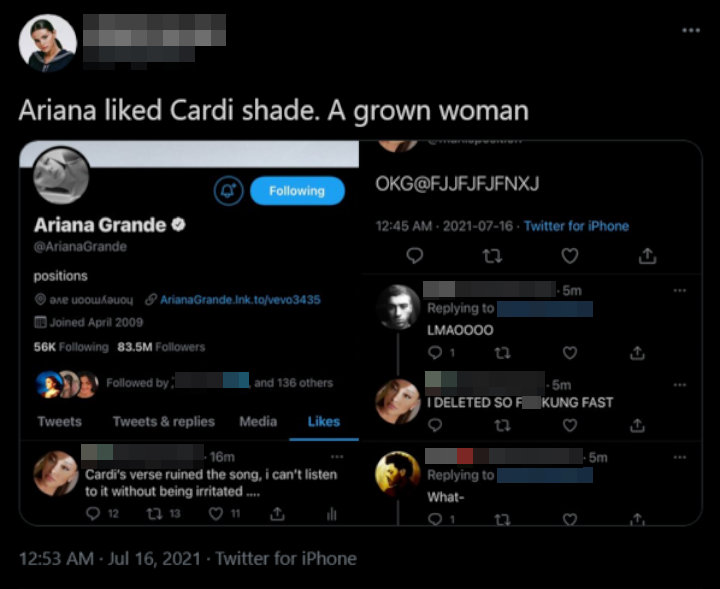 However, some Internet users have found evidence that it was fake. The original Twitter account of @manisposition is still up and clarified that he/she never posted the said tweet dissing Cardi, let alone Ariana liking her/his tweet.

"Ariana would never please, if she liked my tweet I would've been passed out," the said Twitter user wrote. The apparent Ariana fan added, "It's a false alarm giys (sic). Also this is not me lol. The whole thing was blown out of proportion," before stressing, "ARIANA DIDNT LIKE ANYTHING I WAS FREAKING OUT OVER THE WILD SIDE MUSIC VIDEO!!!!!"

Additionally, a screenshot has surfaced of DMs between two people who orchestrated the whole thing. In the alleged chat, one of them contemplated about making a white mode version of the screenshot tweets, which was responded with, "PLEASEEEE" by the other person.

Ariana, meanwhile, has not responded to the allegation.