Addressing the swirling rumors, the 'Taste the Nation' star claims that she is 'not aware' of the allegations against the season 18 winner of the Bravo show and calls for an investigation.

AceShowbiz - Padma Lakshmi has spoken up about the controversy surrounding "Top Chef" star Gabe Erales. Addressing the sexual harassment allegations, the host of the Bravo competition series insisted that the season 18 winner of the show doesn't conduct inappropriate behavior on the set.

On Friday, July 2, the "Tangy, Tart, Hot and Sweet: A World of Recipes for Every Day" author took to her Twitter account to share her thoughts. "To be clear, no one has alleged sexual harassment on the record or otherwise to Bravo/Top Chef," she penned, before admitting, "And we judges didn't have any indication of inappropriate behavior from Gabe during his time on set." 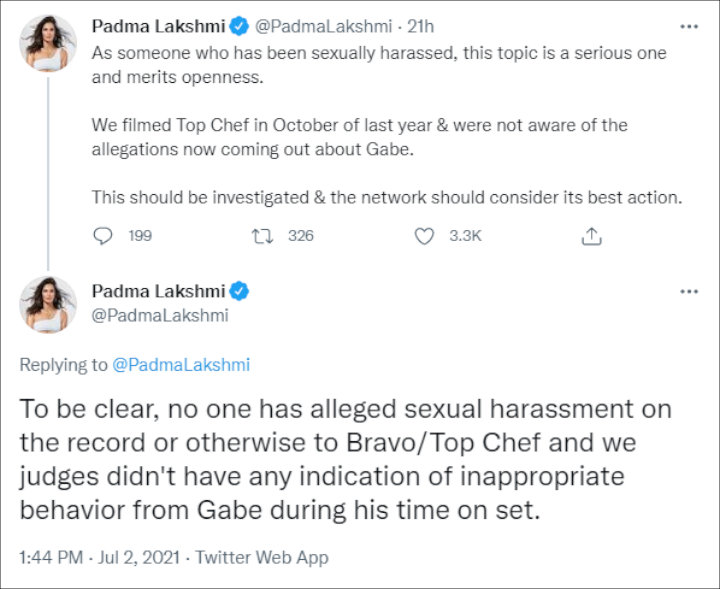 "As someone who has been sexually harassed, this topic is a serious one and merits openness," Padma wrote earlier. The 50-year-old continued, "We filmed 'Top Chef' in October of last year & were not aware of the allegations now coming out about Gabe." She went on to conclude, "This should be investigated & the network should consider its best action."

Additionally, a source close to production informed E! News on Friday, "The production team looked into Gabe's behavior on set and found no indication of anything inappropriate." The insider also explained that "there have been no official reports of allegations against Gabe."

On Thursday night, the Bravo series crowned Gabe champion after he beat out competitors Dawn Burrell and Shota Nakajima. He made history as the first Mexican contestant to win the competition. "One of the biggest things that has really warmed my heart is knowing that I am the first Mexican Top Chef," the celebrity chef said in the episode. "I'm happy to be representing my culture, my cooking, and also a group of people that, really, operate the kitchens across the U.S."

After the episode aired, a number of viewers brought up a December 2020 report claiming Gabe was no longer working at a Texas-based restaurant Comedor due to "repeated violation" of company policies. "Effective immediately, Comedor Executive Chef Gabe Erales is no longer with the restaurant due to repeated violation of our policies and for behavior in conflict with our values," said Comedor co-owners Philip Speer and William Ball in an email obtained by The Austin Chronicle.

Kirstie Alley Slammed After Criticizing People for Being 'Too Open Minded'

Karrueche Tran on Rumors She's Getting Back Together With Chris Brown: 'Next'