Kirstie Alley Slammed After Criticizing People for Being 'Too Open Minded'

The 70-year-old actress has enraged people with a series of opiniated tweets that she shared on her page with one of her tweets sees her criticizing 'sex education' among young generations.

AceShowbiz - Kirstie Alley's recent posts on Twitter landed him in hot water. The 70-year-old actress has enraged people with a series of opiniated tweets that she shared on her page on Thursday, July 2. In one of her tweets, she criticized people for being too "open minded."

"People are becoming so 'open minded' that down the road they will support pediphilia as people 'just loving children,' " so the "Cheers" actrees wrote on the blue bird app. "You think I'm kidding. I'm not. It's the direction this insanity is headed. You can 'ok boomer' me all you want but this is where we will veer unless we change."

When someone told her that "when you choose [Donald] Trump and the GOP you forfeit the right to say lecture anyone about morality. Ever," Kristie responded, "Au contraire. I reserve the right to say whatever I want on my own timeline. Always."

Comparing to her generation, Kirstie went on to note, "My generation had zero public sex talk and zero sex education. In 'health' class we did learn about 'periods'.. sort of. But I can honestly say sex came fairly naturally when the occasion arose."

One user tried to tell her that the lack of sex education caused "many many girls got pregnant." In response to that, Kirstie argued, "AND now with all this sex 'education' more girls than ever are getting pregnant and abortion rates are out the roof... sooooooo what's YOUR point?" 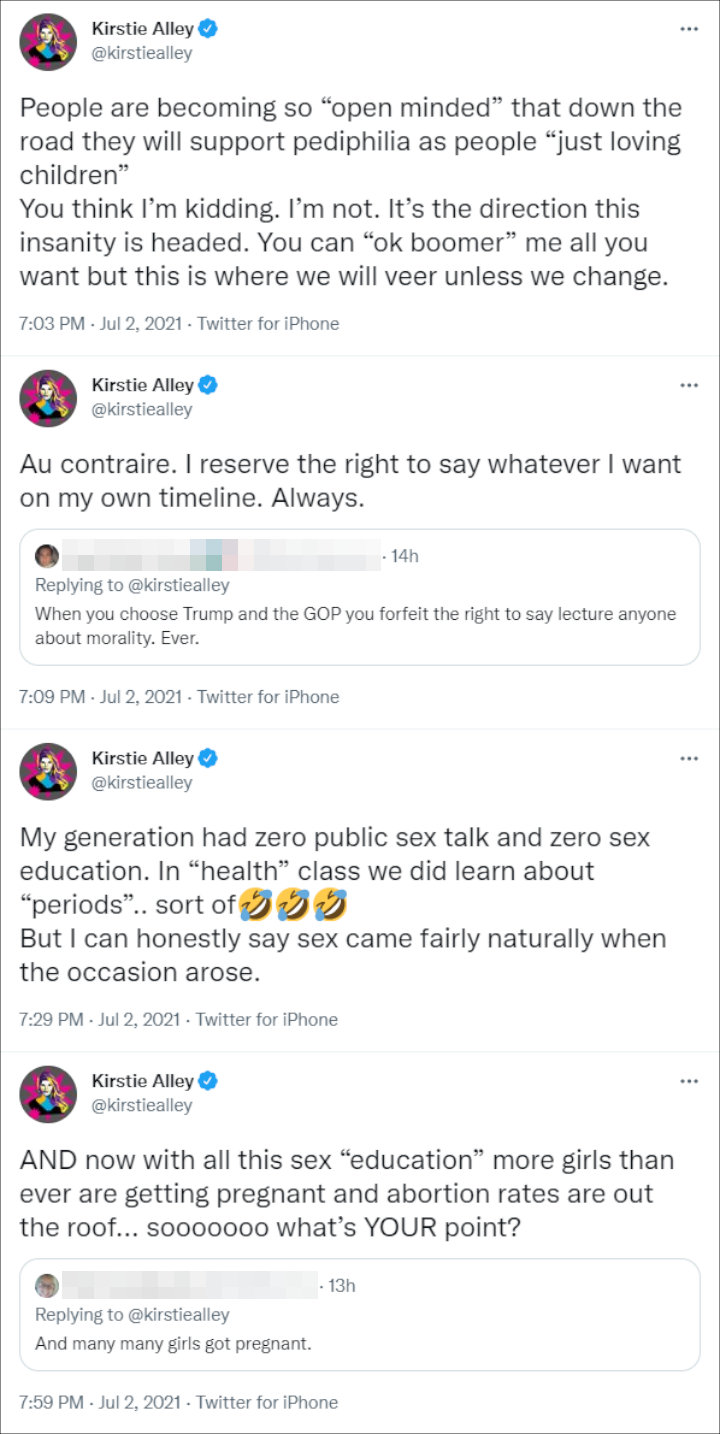 This is not the first time for Kirstie to start social media drama. Back in October 2020, she wrote on Twitter that she was voting for Donald Trump in the 2020 presidential election "because he's not a politician." She explained at the time, "He gets things done quickly and he will turn the economy around quickly. There you have it, folks, there you have it." Among those who slammed her for the post was Judd Apatow.