Bam claims he specifically calls out Johnny and Jeff Tremaine because they 'strung [him] along like a puppet' before he was axed from the upcoming 'Jackass 4'.

AceShowbiz - Steve-O will not let Bam Margera say negative things about Johnny Knoxville and "Jackass" director. Upon learning that Johnny and Jeff Tremaine were publicly called out by the former professional skateboarder on social media, the comedian was quick to defend them.

On Sunday, May 23, Bam first shared an Instagram video of him ranting at Johnny and Jeff. "So, my family, 'Jackass', has betrayed me, abandoned me, rejected me," he argued. "Not all of them, I love all of them and they love me back, but specifically, Jeff Tremaine and Johnny Knoxville."

"So, I feel like my family has f**king done everything horrible to me, and made me jump through hoops and walk on eggshells, which is impossible," the stunt performer further raged. "And strung me along like a f**king puppet to get the $5 million I usually get when making a movie with them."

Bam's post has since caught Steve-O's attention. In the comment section, the latter penned, "Bam- the two people you're saying wronged you (Knoxville and Tremaine) are the same two people who organized the intervention which saved my life. Everyone bent over backwards to get you in the movie, and all you had to do was not get loaded. You've continued to get loaded, it's that simple." 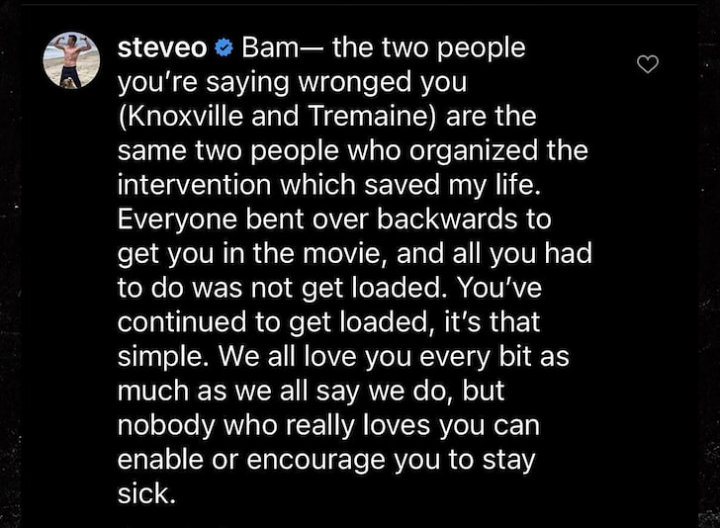 Steve-O defended Johnny Knoxville and Jeff Tremaine after being slammed by Bam Margera.

Despite the anger, Bam shared good news with his fans, claiming he is getting himself the help he needs. "I am visiting a very special lady... She has helped celebrities like Brian Johnson from AC/DC, Steven Tyler, etc.," he said. "I'm in Florida. I'm safe and I'm getting phenomenal help with peace and f**king quiet with the green queen."

Bam was fired from "Jackass 4" after allegedly breaching his contract by not getting his addiction issues in check during  production of the project. He was supposed to follow the orders of taking his medication, blowing into a breathalyzer, staying sober, seeing a psychologist and doing routine drug tests, but he failed to do so.

Steve-O Explains Why 'Jackass' Is a 'Bad Influence' on Kids