Amanda Seyfried Steps In as Disgraced Elizabeth Holmes in 'The Dropout'

The 'Mank' actress has been brought in to the Hulu series, which is based on a podcast about the rise and fall of Holmes and her biotech company Theranos, in the wake of Kate McKinnon's exit.

"Saturday Night Live" regular McKinnon exited the series, based on a podcast about the rise and fall of Holmes and her biotech company Theranos, in February, and now the "Mank" star has stepped up to play the fraudster and also produce the project.

This role as Holmes was Amanda's first since receiving a Best Supporting Actress nomination at 2021 Oscars for her portrayal of Hollywood actress Marion Davies in "Mank". She will be seen starring in Amy Koppelman's "A Mouthful of Air" as well as an upcoming Netflix thriller, "Things Heard and Seen".

Showrunner Elizabeth Meriwether will executive produce this limited drama series along with Liz Heldens, Liz Hannah, Katherine Pope, Rebecca Jarvis, Victoria Thompson and Taylor Dunn. It was suggested that filming may start in May.

Holmes founded medical testing start-up Theranos and became the world's youngest self-made female billionaire in 2014 after claiming scientists at her company would revolutionize blood testing. It was later revealed that none of the tech she created actually worked, putting thousands of people's health in danger.

In 2018, Holmes and another former Theranos boss were indicted on a string of wire fraud and conspiracy to commit wire fraud charges for falsifying results to consumers.

"The Dropout" is the latest screen project to explore Holmes' story - it was also the subject of the 2020 documentary "The Inventor", directed by Alex Gibney.

Jennifer Lawrence had also previously been linked to the role of Holmes in a planned Adam McKay film, called "Bad Blood", although it's unclear if the film, initially announced in 2016, is still in development.

Sandra Lee Describes the Pain From COVID-19: 'It's Like a Pinball Machine Had Gone Off'

'The Voice' Recap: One Coach Uses His Save Right Away as the Battle Rounds Begin 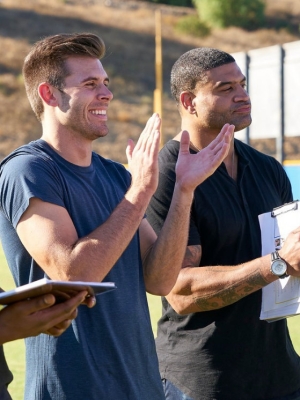