After 'The Crown' star surprised many with her native American accent when delivering her acceptance speech, the '30 Rock' actor makes a subtle dig at the heritage controversy plaguing his wife.

AceShowbiz - Alec Baldwin has once again bid farewell to Twitter. Just hours after taking a subtle swipe at the buzz over Gillian Anderson's accent switch at the 2021 Golden Globes, the former "30 Rock" alum deleted his official account on the blue-bird site.

Prior to deactivating his page, the 62-year-old actor weighed in on people's confusion over "The Crown" star's native American accent. Retweeting an article about the issue, he made a subtle dig at the heritage controversy plaguing his wife, Hilaria Baldwin, by writing, "Switching accents ? That sounds...fascinating." 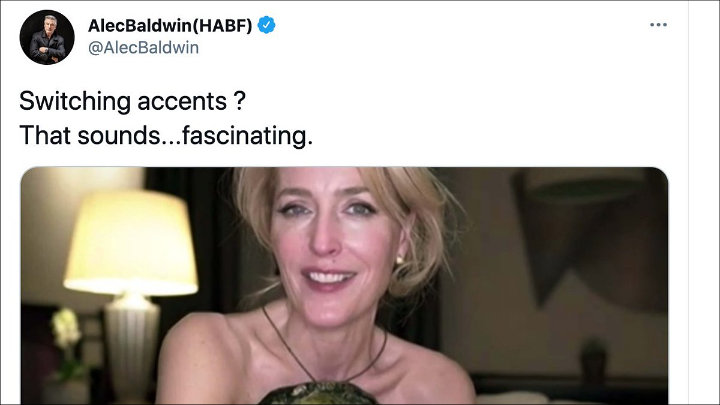 Alec's Wednesday, March 3 post came after many questioned Gillian's American accent that she used when accepting her Best Supporting Actress in a TV Series trophy. One penned in disbelief, "Just had my mind blown discovering @GillianA doesn't actually have an English accent in real life."

Another asked, "was anyone else very extremely shocked to find out that gillian anderson is NOT BRITISH AT ALL?! FULLY american. WHY does she only do roles that require a british accent????? i've been bamboozled beyond recognition." A third joined in, "i'm always so surprised hearing gillian anderson's american accent."

Gillian, who was born in America but spent years living in London, was mostly seen speaking with British accent on a number of TV series including "Sex Education", "Bleak House" and "The Fall". Back in 2009, she talked about her ability to switch between American and British accent. To The Telegraph, she said, "Even on the phone, my accent will change."

"Part of me wishes I could control it, but I can't," she pointed out. "I just slip into one or the other. When I moved to the States I tried hard to cling on to my British accent because it made me different."

Alec might have made a subtle dig at Gillian's accent switch in defense of his wife Hilaria, who had been accused of faking her Spanish accent in December 2020. The fitness expert herself, meanwhile, has come clean about her heritage. She admitted that she is indeed "a white girl" who was born in Boston, but spent "some of [her] childhood in Spain."

Hilaria Baldwin Spills Secret to Getting Rid of Hecklers