The comedian catches flak after an old clip of his awkward interview with the 'Herbie: Fully Loaded' star resurfaces online, showing him pressing the actress with questions about her addiction issue.

AceShowbiz - David Letterman may have stepped away from the spotlight now that he no longer hosts a late night talk show, but his past interview has been heavily scrutinized by people. The comedian comes under fire after a Twitter user brought forward an old clip from 2013 episode of "Late Show with David Letterman", which featured his awkward interview with Lindsay Lohan, who at the time agreed to do 90 days in rehab to avoid jail time over a car accident the year prior.

During the sit-down, the David pressed Lindsay with questions about her upcoming admittance into rehab and her addiction struggles despite her looking uncomfortable. "Aren't you supposed to be in rehab now?" the host asked the actress, who was on the show to promote "Scary Movie 5". A seemingly annoyed Lindsay replied, "Do you not watch anything that goes on? What are you a tabloid now?"

Despite her refusal to discuss the topic, David continued to ask Lindsay questions like "How long will you be in rehab?" "How many times have you been in rehab?" and "How will this time be different?" He continued pressing, "What are they rehabbing first of all? What is on their list? What are they going to work on when you walk through the door?" while the audience seemed to be amused by his questions.

"We didn't discuss this in the pre-interview, just saying," Lindsay said, while trying to keep things cordial. "I think, to be honest, I'm the happiest when I'm working and the healthiest and I think this is an opportunity for me to, you know, focus on what I love in life and I don't think it's a bad thing. I think it's a blessing."

It didn't stop David from asking her about her addiction problems, though. "Is it alcohol? Do you drink too much?" he asked. Lindsay tried to playfully shut down the questions by telling him they'd discussed this in the past.

"Really? When did we? Now I'm the one having blackouts. I ought to be in rehab, for the love of God," he said. The then-26-year-old star then reminded him, "We're here for a movie. Let's stay on the positive."

When they returned for a new segment, Lindsay inspected David's notes after the surprise rehab questions. "You can't make a joke of it. That's so mean," she scolded him. "No. No, we're not doing that. This is my show now."

After the clip of the old interview popped online, David was heavily criticized on Twitter for his insensitive questions and pushing the stigma of addiction and rehab. The Face Magazine editor Trey Taylor, who posted the video Twitter, remarked, "This Lindsay Lohan interview on David Letterman in 2013 is horrifying to watch now." 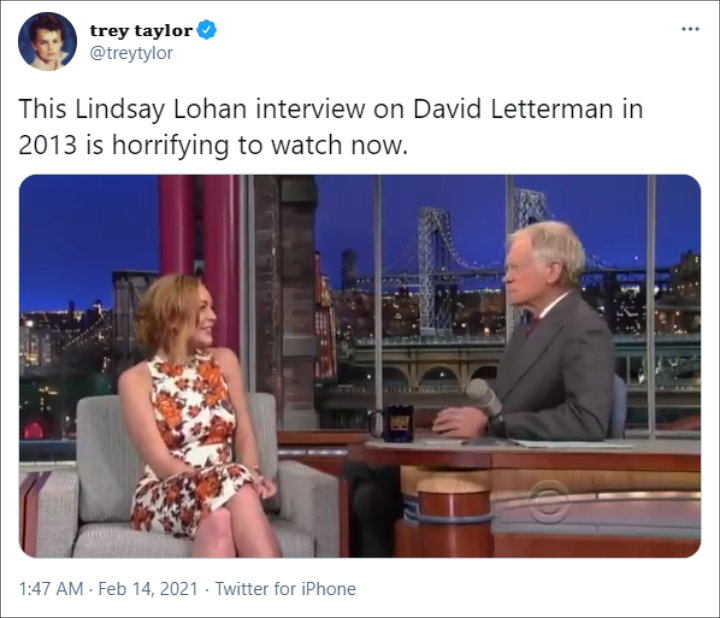 A Twitter user slammed David Letterman over an awkward interview with Lindsay Lohan.

Another agreed, writing, "The Lindsay Lohan/Letterman interview that people are revisiting is horrendous. There are ethics in interviews, & Letterman honored none of them." A third person tweeted, "I wanna say David Letterman is allowed to make mistakes, but he's been on TV since forever. I wanna say this could be a norm in 2013, but it's painful to watch. Let's all just learn from it."

Another slammed the host and the audience, who laughed at his jokes, "David letterman was so DISGUSTING to Lindsay Lohan here! And everyone laughing at her for going to rehab. Nuts to see an adult make fun of a drug addict trying to get help. So happy Culture Loves #AA now & rehab. Everythings changed. It was so bad then." Someone else similarly added, "Ugh this makes me so sad. Shame on David Letterman and shame on his show for the claps and laughs throughout the interview."

David has not responded to the backlash over his old interview.

James Marsters Weighs in on Joss Whedon Abuse Allegations: 'Buffy' Was Not Without Challenges