Raising a suspicion about the Boss' arrest for alleged drunk driving in November 2020, the 'Boss Baby' star suggests that the rocker might be cited because he is a liberal.

AceShowbiz - Alec Baldwin raised a suspicion regarding Bruce Springsteen's DWI arrest. Seemingly at disbelief that the E Street Band leader had a run-in with the law for driving violation, the actor shared his theory which suggested that the rocker's political view was behind the arrest.

"I wonder if Springsteen's arrest had anything to do with his politics," so the "30 Rock" alum tweeted on Thursday, February 11, suggesting that Bruce may have been issued a summons because he is a liberal. The 62-year-old actor, however, provided no evidence for his suspicion, prompting his followers to share their own two cents on the matter.

"Certainly possible," one person agreed with Alec. A second one said he had the same suspicion, writing, "It more than crossed my mind…" A third user commented, "No doubt. It's such bulls**t." When someone strongly suggested that Bruce "was drunk," another countered that the singer's "blood alcohol level was .02" at the time of arrest.

Other celebrities have also expressed their support for Bruce following the revelation of his DWI arrest. "They arrested Bruce Springsteen in New Jersey! This is Sacrilegious," actor Michael Rapaport wrote. "Would you arrest the Pope in Italy? Free The Boss!" The singer's E Street bandmate Stevie Van Zandt added, "I hear that. Totally unbelievable." 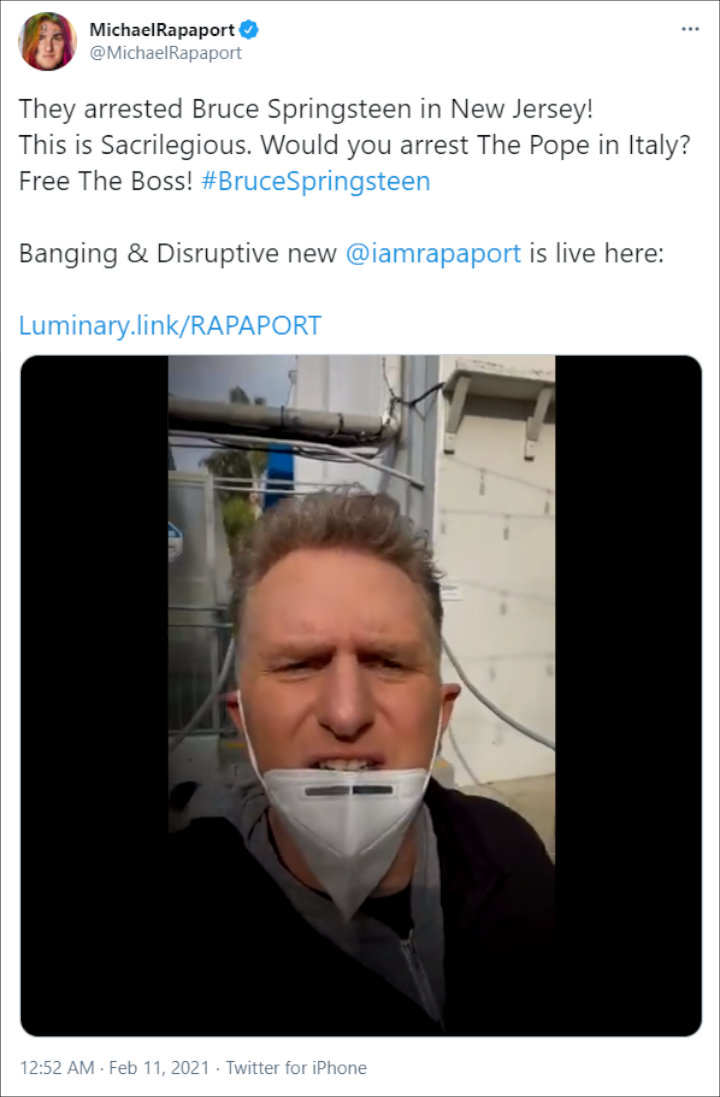 Bruce was arrested on November 14 at the Gateway National Recreation Area at Sandy Hook, N.J. for driving while intoxicated, reckless driving and consuming alcohol in a closed area, according to the National Park Service. An NPS ranger identified as R.L. Hayes reported that he saw The Boss taking a shot of tequila getting on his red and silver Triumph motorcycle and starting the engine.

The 71-year-old had stopped for a photo with fans when he was offered the shot of booze, which he accepted. He allegedly refused to take a preliminary breath test when first approached by a park ranger, but later his blood-alcohol content was later found to be 0.02, a quarter of New Jersey's legal limit of 0.08.

Bruce is expected to make a virtual court appearance in connection with the case, but no date has been set just yet. After news broke of his arrest, Jeep took down its ad featuring the rocker which aired during the Super Bowl LV broadcast on February 7.

One Direction Fans Thrilled as They Believe Harry Styles and Niall Horan Reunite in L.A.

Hilaria Baldwin Spills Secret to Getting Rid of Hecklers