The 'XO Tour Llif3' hitmaker and the 'Oblivion' singer set plans to get brain chips implanted together following Elon Musk's announcement that Neuralink has implanted a chip in a monkey's brain.

AceShowbiz - Lil Uzi Vert and Grimes are willing to be the subjects of experimental surgery. The two musicians set up plans to get brain chips implanted together as they conversed on social media about the new technology which is being developed by Neuralink.

On Sunday, February 7, Uzi simply tweeted, "Neuralink," a start-up which is owned by Grimes' boyfriend Elon Musk. In its website, the company says, "We're designing the first neural implant that will let you control a computer or mobile device anywhere you go. Micron-scale threads are inserted into areas of the brain that control movement. Each thread contains many electrodes and connects them to an implant, the Link."

Noticing the rapper's interest in the technology, Grimes extended an offer to the "Money Longer" spitter, "Let's get brain chips." Uzi was all game, replying, "I'm ready when we doing it ?"

The Canadian singer then responded, "Let's aim for chips by 2022. it's experimental surgery but if it succeeds we'll have the knowledge of the Gods haha." Their talk will apparently continue behind the scenes as Uzi wrote back, "Okay !!! I will call u for more detail." 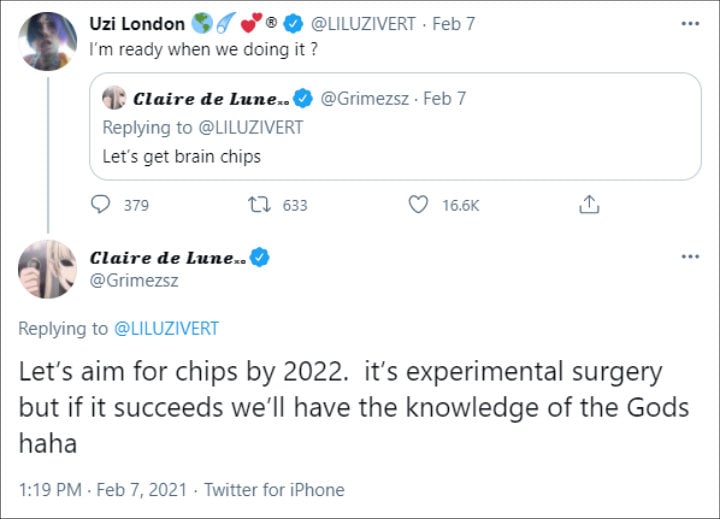 Lil Uzi Vert and Grimes plan to get brain chips.

Uzi and Grimes' strange interaction occurred roughly a week after Elon's Neuralink announced the company has successfully put a computer chip into a monkey's skull and the monkey is now able to play video games with its mind. He said Neuralink used "tiny wires" to connect the computer chip to its brain.

"It's not an unhappy monkey," he said during a talk on Clubhouse. "You can't even see where the neural implant was put in, except that he's got a slight like dark mohawk." As for the next step, Neuralink is trying to figure out if it can use its chips to get monkeys to play "mind Pong" with each other. "That would be pretty cool," the CEO of SpaceX and Tesla gushed.