The 'ZEZE' spitter celebrates his release by getting some icy new accessories that includes a permanent diamond grill with ruby stones, an iced-out COVID-free mask and sanitizer case.

AceShowbiz - Kodak Black has surprised many people with his drastic transformation. Two weeks after he was released from jail following a pardon from former president Donald Trump, the "ZEZE" spitter showed off his slimmed-down figure through first post-prison photos.

In several pictures surfacing on Twitter, the 23-year-old could be seen to have dropped a significant amount of weight. The snaps also displayed him sporting long dreadlocks, new forehead tattoo and some jewelries while holding his new puppy. 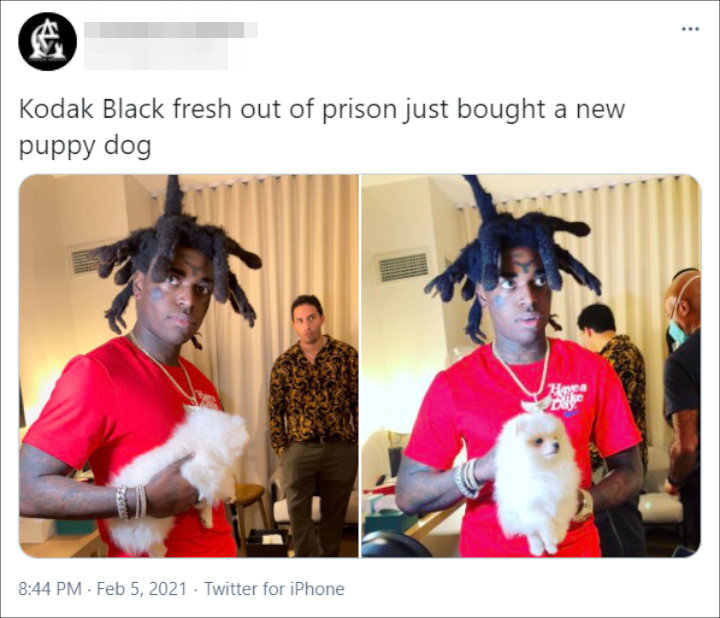 Kodak Black showed his slimmed-down figure after being released from prison.

Kodak, who is also known as Bill Kahan Kapri, celebrated his prison release by getting some icy new accessories. Celebrity jeweler Johnny Dang shared on his Instagram a clip of him posing with the rapper. In the caption, he penned, "Welcome home, @kodakblack good to zee you home man and work with you. We do too many crazy new 1 of 1 pieces tonight."

Kodak, who was sentenced to 46 months in Kentucky's United States Penitentiary Big Sandy after pleading guilty for unlawful possession of marijuana and criminal possession of a firearm, became a free man on January 20. He, along with fellow incarcerated rapper Lil Wayne, received a pardon from Trump on the latter's final full day as POTUS.

A few months before, the "Wake Up in the Sky" rapper declared his intention to give back should he was granted a presidential pardon. "If The President Them Free Me, I'm Gonna Spend 1 million on Charity with The First Year I'm Out," he tweeted. "That's On Everything!!"

Kodak, however, deleted the tweet after his lawyer, Bradford Cohen advised him to do so. "I didn't think I had to address this because its a non story," the lawman explained in a statement. "But due to a slow news day @tmz_tv wishes to address a tweet that was sent out from @kodakblack Twitter 2 months ago and deleted within a day or 2 of posting at my direction."

Kodak Black Admits to Crying When Saweetie Chose Quavo Over Him