The cover photo that brings the magazine under fire for the Vice President elect's inappropriate style and 'washed out' look is reportedly not what they agreed upon.

AceShowbiz - Vogue has landed in hot water for its Kamala Harris cover. Attempting to honor the Vice President elect by featuring her on the front page of its February issue, the magazine has been widely criticized for Kamala's alleged "washed out" look and her inappropriate style.

"Kamala Harris is about as light skinned as women of color come and Vogue still f**ked up her lighting. WTF is this washed out mess of a cover?" one Twitter user complained about Harris' apparent lighter skin in the cover.

She also took issue with Harris' fashion style in it, writing, "Vogue knows Kamala Harris loves her sorority, suits, comfortable pants and chuck taylors. So they just jumbled it all together for the cover. Except they couldn't decide whether she is going to a luxe French salon, the Senate floor, or taking a jog."

"What a mess up. Anna Wintour must really not have Black friends and colleagues," author Wajahat Ali simply wrote. Another blasted the magazine's Editor-in-Chief "Anna Wintour needs to go. If the only time her team can properly style a black women is when she's covered in couture then her tenure has ran it course. Look at how Kamala Harris' Elle cover straight up bodied Vogue. Electric chair!" 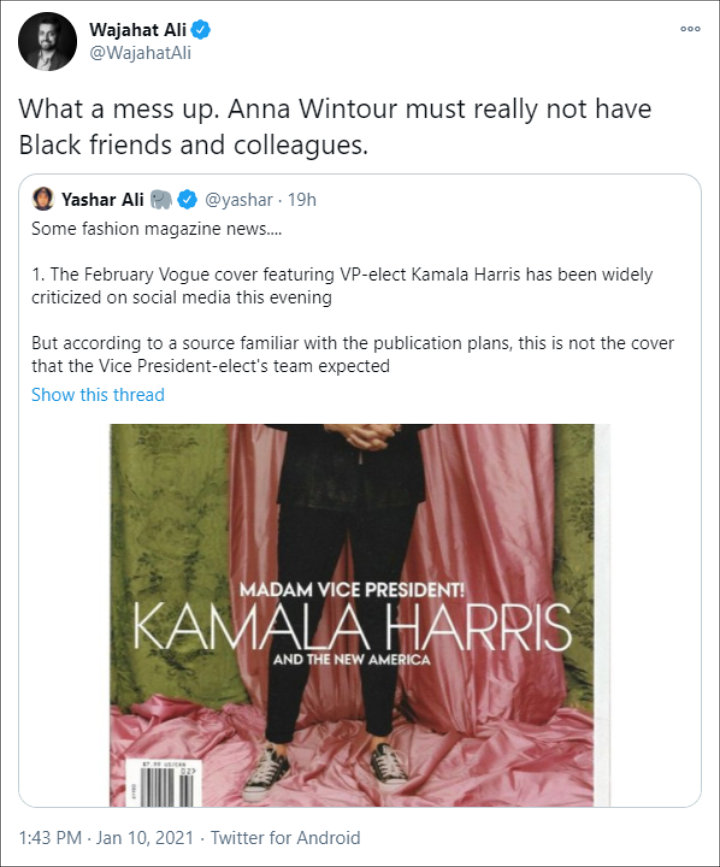 "Folks who don't get why the Vogue cover of VP-elect Kamala Harris is bad are missing the point," activist Charlotte Clymer tweeted. "The pic itself isn't terrible as a pic. It's just far, far below the standards of Vogue. They didn't put thought into it. Like homework finished the morning it's due. Disrespectful."

Someone else pointed out, "Vogue has Kamala Harris in some f**king Converse. Someone needs to throw a cinderblock at Anna Wintour fr."

Not everyone, however, hated the cover. Someone praised Vogue for presenting Harris in a style that represents this "Generation." The said user wrote, "@voguemagazine this is our Generation! @KamalaHarris I had a pair of @Converse in middle school! #1984 now this is the #BRAND #GENZ WANTS! My daughter WANT's #CONVERSE I wear leggings with a jacket like that because I'M COMFORTABLE! Bravo #vogue it sets a example #reality #2021."

Vogue has not responded to the backlash and Harris has not publicly addressed the controversy, but it's said that the cover isn't what her team "expected." Journalist Yashar Ali claimed a source told him, "In the cover that they expected, Vice President-elect Harris was wearing a powder blue suit. That was the cover that the Vice President-elect's team and the Vogue team, including Anna Wintour, mutually agreed upon...which is standard for fashion magazines."

Sharing the supposed original version that they had agreed upon, Ali added, "I'm told this cover on the left will be the digital cover, but the much maligned cover on the right has already gone to print and will be the cover available for sale and sent to subscribers." He went on noting, "So folks feel blindsided this evening."

Kamala Harris Receives Her First COVID-19 Vaccine: 'Let's Do It'